Some networks have multiple Points of Presence interconnected both internally via inter-datacenter links and externally via multiple transit providers. For such networks, the traditional route optimization methods require engineering teams optimizing traffic in each of those locations and synchronizing their network policies.

Since the platform has to perform improvements locally as well as between other locations, the concept of Routing Domains was required for distinguishing between network locations. A Routing Domain’s main characteristic is that its routing tables originate from data received from its locally connected transit providers, while their preferred routes are defined via local policies.

A Local Improvement represents a better alternative route, identified within a single routing domain and distributed to the routing domain’s own routers. Such improvements are not redistributed outside their own routing domain, allowing IRP to perform improvements locally. This way, local traffic exits the customer’s network via local providers and not via the data center interconnection links.

The Global Improvements are represented by alternative routes, which are better performing options even when latency from inter-datacenter connections is considered. These move traffic through data center interconnects and as such are less desirable to local routes. Global improvements make even more sense when routing via different datacenters reduces packet loss rates significantly. The route optimization process is now focused on finding better alternative routes locally (within a Routing Domain) and only reroutes the traffic to other Routing Domains via inter-datacenter links when local routes are underperforming.

There are cases when Optimization for multiple Routing Domains is not possible. If a network’s Points of Presence are located a considerable distance from each other, collecting statistics about traffic, probing available destinations and making improvements towards specific prefixes on the Internet would be inefficient and resource consuming. Considering the illustrated scenario (Figure 1), Intercontinental links connecting the Routing Domains in Tokyo and Melbourne are excessively far away from the IRP instance in San Francisco, and performing improvements for the Routing Domain located in Tokyo or Melbourne would be inefficient. For most of the distant links, performance metrics vary and these fluctuations are quite hard to predict. Because of that, IRP improvement results might lead to inefficient routing updates. In this case, separate instances of IRP are required to optimizing routes separately for each Routing Domain. Inter data center links could be considered as autonomous providers and configured as such. 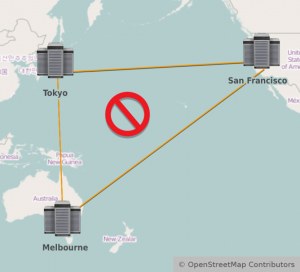 When talking about Routing Domains configuration, if the locations of a network are relatively close to each other, IRP will optimize traffic across these locations more easily, as the latency between inter-datacenter links is relatively low and performing Global Improvements might make more sense when comparing performance metrics.

As you can see in the illustrated example (Figure 2), a network with Routing Domains in San Francisco, Palo Alto, and Fremont is perfectly suitable under this scenario.

In another instance, a single IRP unit handles optimization for POPs situated at larger distances; however, Global Improvements would make less sense due to higher latency added by the inter-datacenter links. To reduce the probability of performing such announcements, the allowed inter-datacenter latency worsening value should be raised in the platform configuration and IRP will perform local optimizations in each Routing Domain, operating similarly to multiple IRP instances. In the illustrated example (Figure 3), one IRP instance improves routes for routing domains located in San Francisco, Salt Lake City, and Las Vegas. Since the allowed latency to perform global improvements is increased, these will be performed only when local links are underperforming considerably.

Considering the obvious benefits delivered by Noction’s support for Multiple Routing Domains, the Intelligent Routing Platform is a step ahead of traditional optimization means and other alternative solutions on the market. Since traditional troubleshooting across multiple routing domains requires extended and synchronized manual intervention, the risk of human error increases exponentially, leaving space for misconfigurations or even service disruption. With its new approach for route optimization across multiple routing domains, Noction IRP comes a step closer to its main objectives of delivering intelligence to customer networks.