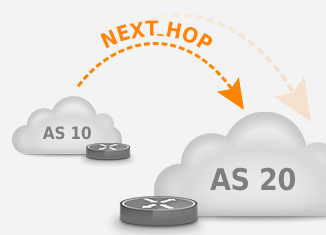 Once a BGP session is established, routers will exchange two types of messages: KEEPALIVE and UPDATE. Keepalive messages are sent to let a neighboring router know we are still alive, but just didn’t have any updates to send. The update message carries three types of information: a list of withdrawn routes, a set of path attributes and “network layer reachability information” (NLRI). If previously advertised prefixes are no longer reachable, they’re sent as withdrawn routes in an update. The NLRI field is simply a list of prefixes that are advertised as being reachable, and the path attributes field holds information about those advertised prefixes. There are four types of path attributes:

Today, we’ll be looking at the BGP NEXT_HOP attribute, which is a well-known mandatory attribute. When looking at a single router that has a BGP session towards another router in a different autonomous system — i.e., an external BGP or eBGP session—the next hop attribute is usually very boring: it simply contains the IP address of the neighboring router. IP packets towards an address covered in a prefix learned over BGP are forwarded to the IP address in the next hop attribute. When a router sends an update over eBGP, it updates the next hop attribute, normally with its own address on the interface that the update is transmitted over.

However, there is a bit more to the next hop attribute. With internal BGP (iBGP) between routers within the same autonomous system, the NEXT_HOP is not updated. So in the figure, router B in AS 20 gets two prefixes from router A in AS 10 with 10.10.10.10 as the next hop. Router B simply sends packets to destinations such as 198.51.100.1 to 10.10.10.10, which is an address on a directly connected interface for router B. Router C, on the other hand, is not connected to the 10.10.10.x subnet, so it has no idea where those packets need to go.

The usual solution to this problem is to run an interior gateway protocol (IGP) such as OSPF and redistribute connected subnets into that IGP. Router C now knows that packets towards 198.51.100.1 go towards address 10.10.10.10 through BGP and that packets towards 10.10.10.10 go to router B through OSPF. So by doing a recursive routing table lookup router C knows to send packets with destination 1928.51.100.1 to router B. This also works if there are additional hops between routers B and C.

An alternative solution is to configure eBGP routers with next-hop-self. In that case, those routers will put their own address in the next hop attribute and there is no need for iBGP routers to know the subnets used for eBGP. This way, it’s possible to not have an IGP, as long as all the routers are directly connected to each other.

By using a route map, it’s possible to manually rewrite the next hop attribute. This is often useful in the face of (distributed) denial-of-service (DoS and DDoS) attacks. For instance, on a Cisco router, this configuration will update the next hop address to an address that is routed to the Null0 interface:

The result is that if the 65000:13 community attribute is present on a prefix, all traffic towards that prefix is routed to the Null0 interface and dropped. An ISP can use this configuration to allow customers to have traffic for certain (sub-) prefixes or individual addresses filtered out so other prefixes (which don’t get the 65000:13 community) remain unaffected by the attack. Alternatively, traffic can be redirected to the address of a filter box that can look deeper inside the packets and remove the unwanted traffic.

Please note that it’s also possible to use a route map to update the next hop address when forwarding IP packets. This is a way to bypass normal routing table lookups and is known as “policy routing”, and should not be confused with modifying the next hop attribute in BGP or other routing protocols.

In our blog post on IPv4 BGP vs IPv6 BGP we talked about how it’s best practice to use separate eBGP sessions for IPv4 and IPv6. The reason for this is that the router can’t simply put the IP address for the local end of the BGP session in the next hop if the session runs over IPv4 and the prefixes are IPv6, or the other way around. Because the next hop isn’t updated for iBGP, sending both IPv4 and IPv6 prefixes over a single (IPv4 or IPv6) iBGP session is not an issue.