Home Blog The 768k or Another Internet Doomsday? Here’s how to deal with the...
Rate this post

On August 8th, 2014 some ISPs experienced a phenomenon called the “512k Day”. The global BGP routing table, which consists of the global Internet routes and reflects how ISPs reach destination IPs, stretched to more than 512,000 records. Routers with the high-speed memory called Ternary Content Addressable Memory (TCAM) limited to 512,000 entries, were unable to store more than 512k routes.  As a result, the affected routers crashed due to a higher CPU usage as they switched to slow software switching. This caused network outages around the globe as packets were lost on their way to a destination. The workaround from Cisco suggested using route filtering and a default route that helped decrease the number of routes in the affected devices. Prefix lists could be used as an alternative to access lists in many BGP route-filtering commands[1].

Now, after almost 5 years, we might encounter a similar problem. The size of the global Internet routing table is reaching 768k routes so the possibility of the TCAM resource exhaustion at 768k routes is coming. Although many legacy routers with limited TCAM size have been replaced already, it is possible that there are still many devices remaining that may encounter the TCAM issues. The good news is that the TCAM size for IPV4 routes can be modified for some network equipment. For example, to increase TCAM on 3BXL modules for Cisco Catalyst 6500 and 7600 series routers and switches you can enter the command below. Afterward, save the configuration and reboot the device [2].

The command does not increase the overall size of the FIB TCAM, but it reduces the number of routing entries that are allocated to the IPv6 in order to increase the amount of TCAM space for IPv4. Maximum routes are set to 1024000 (1000k or 1000 * 1024 ) and the total number of available MPLS labels, IPv6 routes, and IPv4 multicast routes is reduced to only 8,000. See Picture 1.

Picture 2 depicts a new TCAM allocation after the reboot. These new settings will help your network avoid any performance degradation, routing instability, or impact on availability. In other words, the proposed solution will help you deal with TCAM overflow at the 768k boundary. 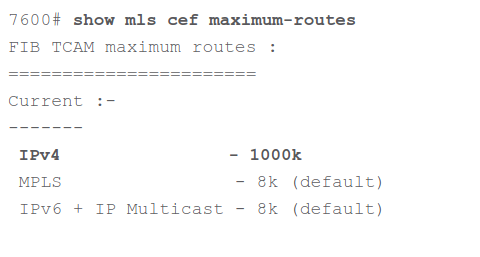 So far, we have explained the effects of TCAM exhaustion and discussed a workaround that reduces the size of  IPv6 TCAM in favor of IPv4 TCAM. The most common question, however, is when the global BGP table size will reach the 768,000 routes. The answer can be provided by a Twitter bot that tweets the size of IPv4 BGP table 4 times a day.  The bot reported that the global Internet routing table had passed 768,000 routes on April 17th, 2019 (Picture 4). The prefixes smaller than /24 were filtered. 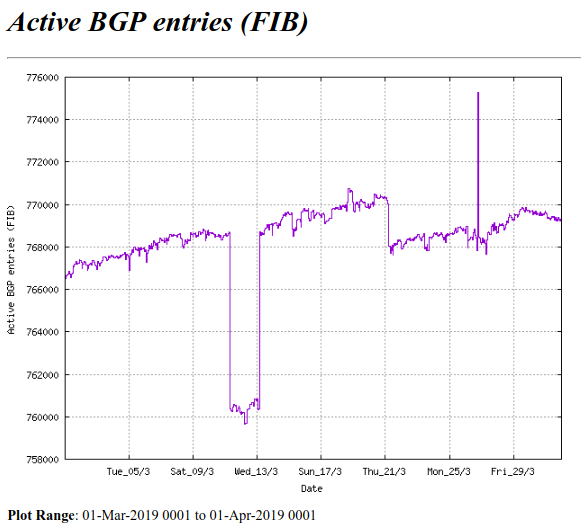 Another interesting factor that raises ambiguity in when and if the 768k boundary has been reached is the interpretation of the “k” value. Some sources suggest that “k” should be interpreted as 1024 for TCAM size. This gives us the value of 786432 global Internet routes that have not been reached yet.

You can simply check an actual size of the global Internet routing table connecting to any of the public route servers from the list. Open a terminal and run the command below. The username is ‘rviews’ with the password set to ‘rviews’.

Your networking equipment should be able to manage the ongoing growth of the Internet routing table. If your router might be affected by the 768k limit, you have a number of options here. For instance, you can reconfigure your router to decrease the number of TCAM entries allocated for IPv6 routes in favor of IPv4 routes before your table hits 768k or to filter some prefixes. An upgrade or a replacement of your legacy network equipment can also be an effective solution in order to cope with the outgoing growth of the table.