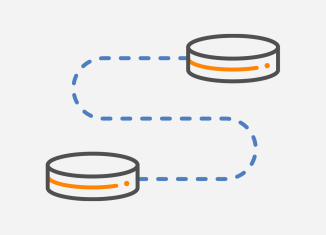 In general, a Pseudowire (PW) is an emulation of a point-to-point connection over a packet-switched network (PSN). To put it simply, PW is an emulated circuit.

The PW is also an industry term for the transport of any frames over an MPLS network using MPLS to encapsulate and LDP as a signaling mechanism. Cisco calls this AToM for Any Transport over MPLS and this is the building block of the Layer 2 VPNs over MPLS [1].

Although PW is defined to run over PSN such IPv4 or IPv6 networks, Layer 2 Tunneling Protocol (L2TPv3) networks, MPLS is now commonly used for this purpose.  Therefore, we will focus on the explanation and configuration of PW related to MPLS-based pseudowires.

Pseudowires can be used to deliver two types of services to end-users:

VPLS emulates a LAN over an MPLS network, so different sites share the Ethernet broadcast domain. MPLS tunnel is set up between every pair of PEs (full-mesh).

VPWS is an L2 point-to-point service provisioned by Layer 2 VPN, which delivers the virtual equivalent of a leased line. Any Transport Over MPLS (AToM) is Cisco’s implementation of VPWS for IP/MPLS networks.

Native packets or frames that are received on ingress PE are encapsulated with two MPLS labels (tunnel and VC) and sent across PWs to the egress PE router (Picture 2):

VC label identifies a particular circuit (PW) in a tunnel and egress AC on the egress PE. This label is on the bottom of the label stack. When the egress PE router receives the packet from Pseudowire, it looks up the VC label in the forwarding information base, removes the VC label (label 21), and forwards the frame to AC. 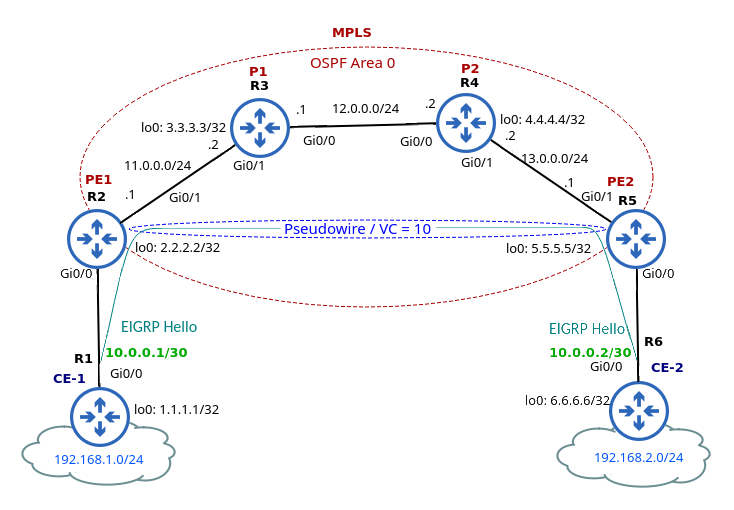 Traffic that is coming through the interface Gi0/0 on R2 is encapsulated and pushed to R5 with two labels (Figure 4).

The bottom (VC) label identifies the tunnel; R2 uses label 21 given by R5 and a local label 16. Similarly, R5 uses the label 16 given by R2. This is because MPLS LSPs are unidirectional by default, so we need two of them in opposite directions to enable bidirectional communication. The top (tunnel) label 18 is to move traffic from R2 to R5.

In terms of CE routers (R1 and R6), they appear to be directly connected by a single L2 circuit. The IP addresses configured on their Gi0/0 interface are assigned from the same subnet 10.0.0.0/30. 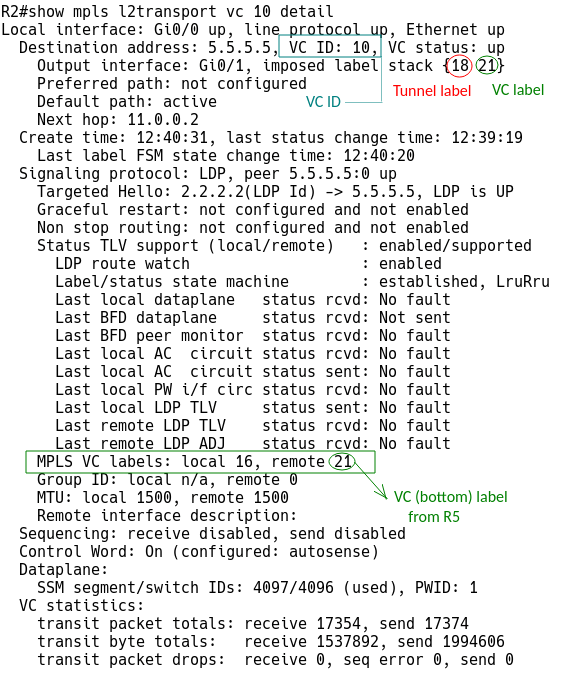 Most of the configuration is done on the PE routers. Initial PE configuration includes enabling mpls globally and for the Ethernet interface toward P router, setting up a loopback for OPSF router ID and configuring OSPF for MPLS.

Finally, we will create a new pseudo-class and select mpls encapsulation for the class. Once we create a pseudowire class, we will use the xconnect command pointing to the IP address of the remote PE router (R5) along with VC ID (10) and the already configured pseudo class for the interface connected to the CE router (Gi0/0).

Configuration of MPLS core is pretty straightforward; we only enable MPLS switching on the interfaces toward PE and P routers and OSPF. Make sure that LDP router ID is forced to a loopback interface.

We can test the PW section of AToM VC with MPLS LSP ping from the R2 router (Figure 6).

Finally, we will test the emulated circuit between CE devices with the ping command (Figure 7).

If a customer is attached to a Service Provider with an existing MPLS backbone, AToM may be a good L2 VPN option to transfer traffic between the customer’s endpoints. Service providers do not need to invest in separate Layer 2 devices.

However, where there is no MPLS-enabled network, L2TPv3 can be used to provide L2 VPN services.