Multihoming with BGP and NAT Tutorial

This tutorial discusses the configuration of a multihomed enterprise network where routers CE-1 and CE-2 in AS 64501 are connected to routers ISP-A in AS64500 and ISP-B in AS64502 for redundancy. The connection via ISP-A is used as a primary connection for both outbound and inbound traffic. The connection via ISP-B is a backup connection. Identical inside hosts behind NAT are translated to different addresses assigned by the respective ISPs depending on whether traffic is forwarded via ISP-A or ISP-B to the Internet. 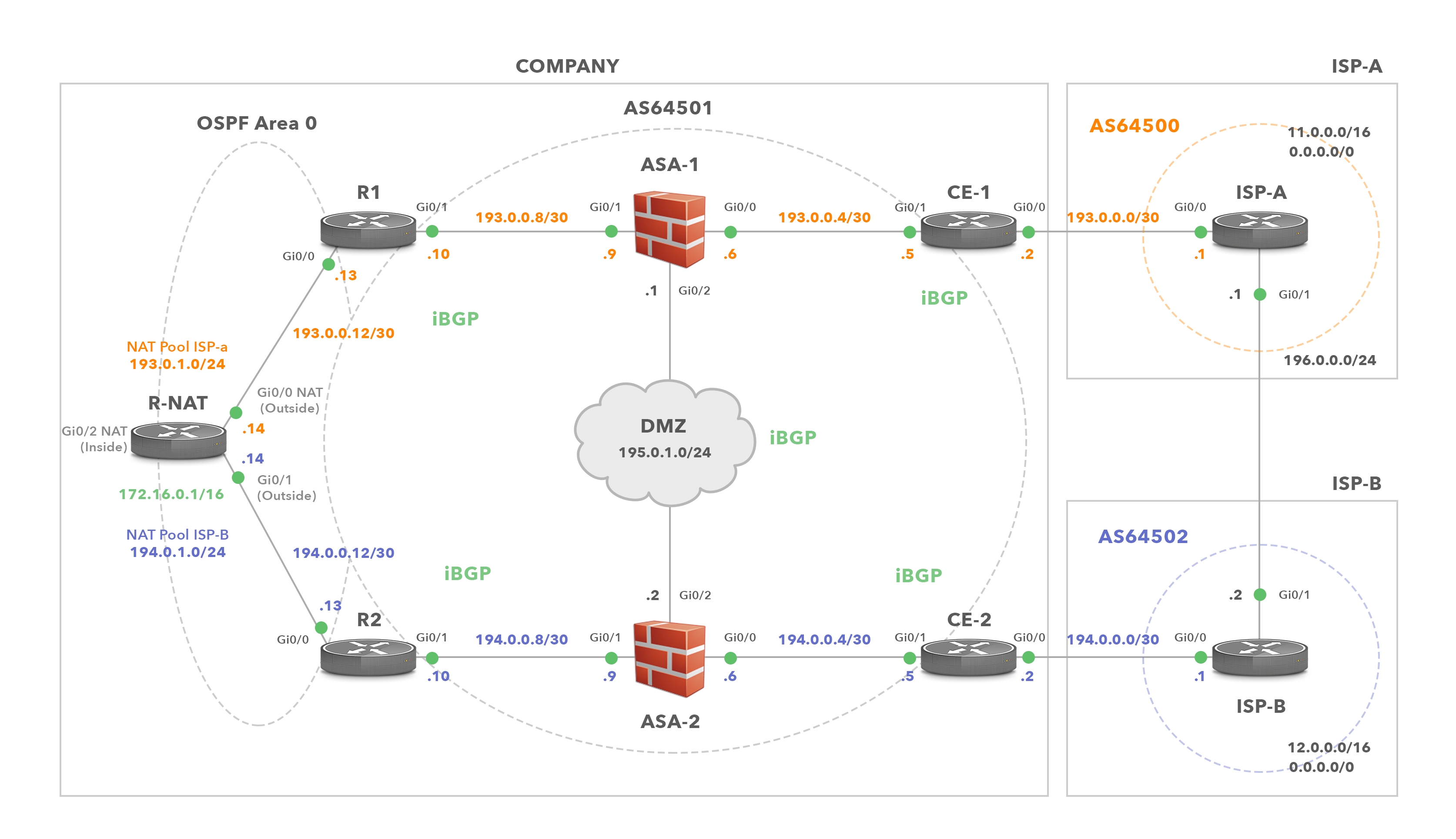 Let’s go through every line of our configuration to explain its purpose. Below are the rules for outbound traffic from the enterprise to the Internet.

Here are the rules for inbound traffic.

The IP address range 195.0.1.0/24 is used for IP address configuration of devices in DMZ. The prefix is advertised by routers CE-1 and CE-2 via eBGP to ISP-A and ISP-B, respectively.  However, since the dmz-north-internet path is preferred over the dmz-south-internet for the outbound traffic from DMZ to the Internet, we set a local preference to 150 for a default route 0.0.0.0/0 via CE-1. It effectively makes the path via CE-1 preferred as the default local preference is 100 for a default route installed in the routing table of CE-2.

The prefix for NAT 193.0.1.0/24 is announced solely by CE-1 in an eBGP update to the ISP-A and from ISP-A into the Internet. As CE-1 is the only router advertising this prefix, the inbound traffic sent from the Internet to the NAT prefix 193.0.1.0/24 takes the internet-north-nat path. The inbound traffic destined for the DMZ 195.0.1.0/24 is also routed via ISP-A to CE-1 and ASA-1 (internet-north-dmz path). The path via ISP-A gets selected by BGP routers located in the other ASs because CE-2 is configured to prepend as-path three times with its own AS 64501 for the DMZ route 195.0.1.0/24 advertised to CE-2. Therefore, the shorter AS_PATH via ISP-A is preferred.

If a link between CE-1 and ISP-A fails, the 193.0.1.0/24 prefix is not advertised by AS64501 at all. It might seem to be a design mistake at first, however when that link fails, the path nat-north-internet is not being used anymore. Instead, outbound traffic from R-NAT to ISP-B is routed via nat-south-internet path with the source IP addresses translated to the pool NAT 194.0.1.0/24. As the prefix 194.0.1.0/24 is advertised by CE-2, the devices behind NAT can communicate with devices in the Internet.

For the iBGP routes with a default AD value 200 to be prefered over OSPF routes with a default AD value 110, we need to change the AD of iBGP routes bellow 110. If we use the command distance 20 105 200 under the BGP configuration of R1, a default route with AD 105 received from CE-1 in an iBGP update message has an AD lower than 110. The AD of a default route advertised by R-NAT from R2 is 110.  Therefore, R1 installs a route 0.0.0.0 via CE-1 into its routing table.

AS64501 is multi-homed, connected to ISP-A and ISP-B for redundancy. We use subnet 193.0.1.0/24 for mapping the inside local addresses to the inside global addresses when outbound traffic from inside hosts is routed via R1. Similarly, the subnet 194.0.1.0/24 is used for translation when outbound traffic from the inside host is routed via R2. Therefore, we have created two NAT pools – 193.0.1.0/24 and 194.0.1.0/24, one for each ISP respectively. The same local inside address from the subnet 172.16.0.0/16 will be translated to different inside global address available in ISP-A and ISP-B NAT pools.

We also implement the pools overload. It means that the first address from the pool and port is to be used. Once all ports are exhausted, the second address from the pool will be used as an inside global address, etc. In theory, up to 65535 inside local addresses could be mapped to a single inside global address (based on the 16-bit port number). This type of NAT is called Dynamic NAT.

Router R-NAT has been configured with the IP address 172.16.0.1/16 on the GigabitEthernet0/2 interface. It is the subnet from a private IPv4 address space (RFC1918) that is going to be translated to NAT pools. Hosts located behind NAT have their IP addresses assigned from this address range. Therefore, we need to tell R-NAT that the interface Gi0/2 is located within the inside network. We will do it with the command ip nat inside.

The line below configures a Dynamic NAT mapping of the inside network 172.16.0.0/16 to a global address from the pool ISP-A. Inside addresses are matched by the route-map ISP-A.

We will do the same for ISP-B pool.

Let’s create a route-map ISP-A. It matches all traffic matched by the access-list (ACL) NAT and going out of the interface Gi0/0.

The route-map ISP-B matches all traffic matched by ACL NAT and going out of interface Gi0/1.

Finally, we create the ACL NAT which is the named source ACL matching traffic from all hosts in the inside network.

R-NAT router is running OSPF and forms OSPF adjacency with routers R1 and R2. Therefore, we must advertise the subnets 193.0.0.12/30 and 194.0.0.12/30. The OSPF point-to-point network type must be configured for both loopback interfaces, otherwise the NAT networks will be advertised as host networks with prefix length /32.

Let’s also implement the inter-area filtering on R-NAT to prevent routes from other areas being advertised into the area 0. 0.0.0.0/0 le 32 matches any prefix with a length between 0 and 32 bits (inclusive). This matches all possible IPv4 prefixes.

Now let’s configure OSPF to advertise a default route conditionally, based on whether the link between CE-1 and ISP-1 is active, with the metric 5. Hence, R-NAT will prefer the route via R1 for outgoing traffic to the default route learned via OSPF from R2, with metric 30.

The R1 router is an iBGP peer with the routers CE-1 and DMZ. The bgp redistribute-internal command can be used as a workaround here. Without this command, even though R1 has a default route with the next-hop 193.0.0.5 learned via iBGP installed in the routing table, a default route is not advertised to R-NAT.

The redistribution of OSPF routes into iBGP is done with the help of the redistribute ospf 1 command. The command distance bgp 20 105 200 changes the default AD from 200 to 105 for routes learned via iBGP.

Now we need static routes to iBGP peers as they are not directly connected.

We will configure OSPF to advertise a default route conditionally, based on whether the link between CE-1 and ISP-1 is active, with the metric 30.

The R2 router is an iBGP peer with the routers CE-2 and DMZ. The command redistribute ospf 1 redistributes OSPF routes into iBGP.

We need static routes to iBGP peers as they are not directly connected.

Multihoming with BGP and NAT – Part 2 >