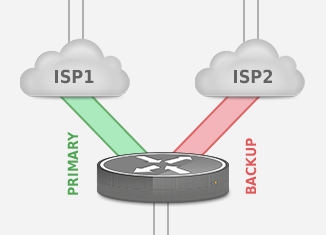 In most cases, when you have multiple connections to multiple ISPs, you want to use both links side-by-side, with each handling a certain fraction of the traffic to/from the internet. As discussed before, the Noction Intelligent Routing Platform (IRP) can automate the load balancing between these different links.

This configuration works exactly as intended when both links go to the same ISP / autonomous system. In that case, they’ll see this in their BGP table:

However, when we make the same configuration where the primary and backup links go towards different ISPs, let’s say AS 65066 (primary) and AS 65077 (backup), it’s almost certain that we’ll see some incoming traffic over the backup link. To some degree, this can be explained by the fact that for some ASes, the path over AS 65077 is still shorter than the path over AS 65066, even with the prepends in place. The obvious solution to that is to apply even more prepends, and the incoming traffic will go down somewhat. However, at some point that simply stops working: even ridiculously long AS paths won’t completely stop the arrival of incoming traffic over the backup link.

To understand why this is we have to look at some scientific research into BGP. In their seminal paper Stable Internet Routing Without Global Coordination Lixin Gao and Jennifer Rexford show that a certain way of using the local preference attribute is necessary to make sure that BGP converges to a stable state. Using a different local preference configuration runs a significant risk that BGP will keep flipping from one state to another and back without ever reaching stability.

So with the Gao-Rexford guidelines in place, we would expect the BGP table for AS 65077 (the backup ISP) to look something like this:

The result of the higher local preference for the direct path is that once traffic ends up at AS 65077, it will flow over the backup link. Because of the AS path prepending, most other ASes that have a choice between sending their traffic through AS 65066 or sending it through AS 65077 will probably send their traffic through the primary ISP, AS  65066. However, networks that are customers of AS 65077 and don’t have another ISP only have once choice: sending their traffic to AS 65077. So the incoming traffic over the backup link will mostly consist of traffic from the backup ISP and its customers.

But there’s a solution. The Gao-Rexford paper continues with a discussion on backup paths. Those should get a local preference value even lower than transit paths. So a valid backup configuration would look as follows in the BGP tables of AS 65077:

Another downside of this setup is that if certain destinations can’t access the path through AS 65066, for instance, because of a peering dispute, they won’t be able to use the backup path over AS 65077. This backup configuration is an all or nothing deal.

This leaves one small detail: AS 65077 needs to apply a configuration that lowers the local preference from the default value of 110 for customers to the backup value of 70. Of course this can be configured manually by AS 65077, but a better solution is through a BGP community that makes the backup ISP apply the local preference value used for backup links. Please see our blog post Understanding BGP Communities for an explanation on how to do this. The relevant example is at the end of the post.