Home Blog Tier 1 carrier performance report: December, 2017
Rate this post
The presented analysis is based on more than 900 million successful probes that span the entire month. All data is aggregated per carrier on a daily basis and accounts for many thousands of successful probes.

The report covers broadly used Tier 1 carriers performance results in the US and the general spread for the month of December 2017. For the US results, rare datapoints from distant locations e.g. Alaska have been omitted.

The presented analysis is based on more than 900 million successful probes that span the entire month. All data is aggregated per carrier on a daily basis and accounts for many thousands of successful probes. A control group (labeled C) is used as a base for comparison. The control group aggregates the average for all transit providers in a network, including Tier 1 carriers.

Fig. 1. Average Loss and Latency in December 2017
The charts include a control group C (gray) to allow cross comparison.

The values for November 2017 are included for cross comparison. 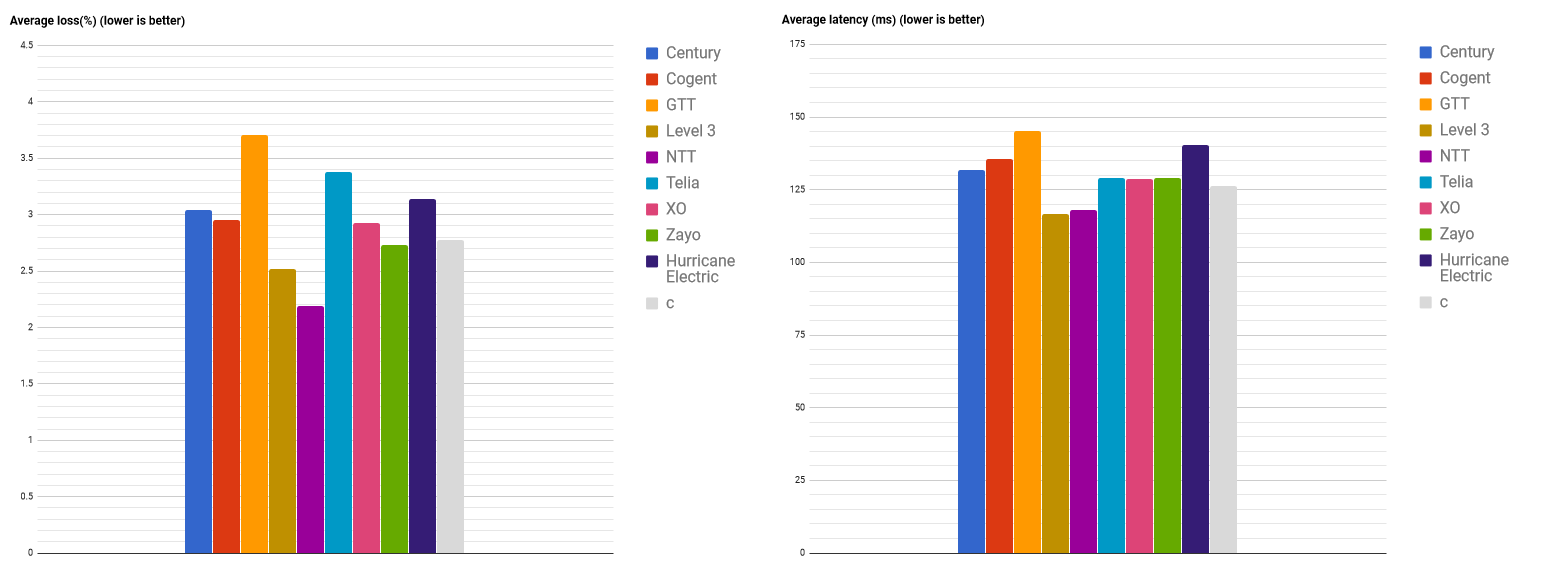 Fig. 2. Average Loss and Latency in November 2017
The charts include a control group C (gray) to allow cross comparison.

The charts below illustrate the performance of each carrier in comparison to the control group level. 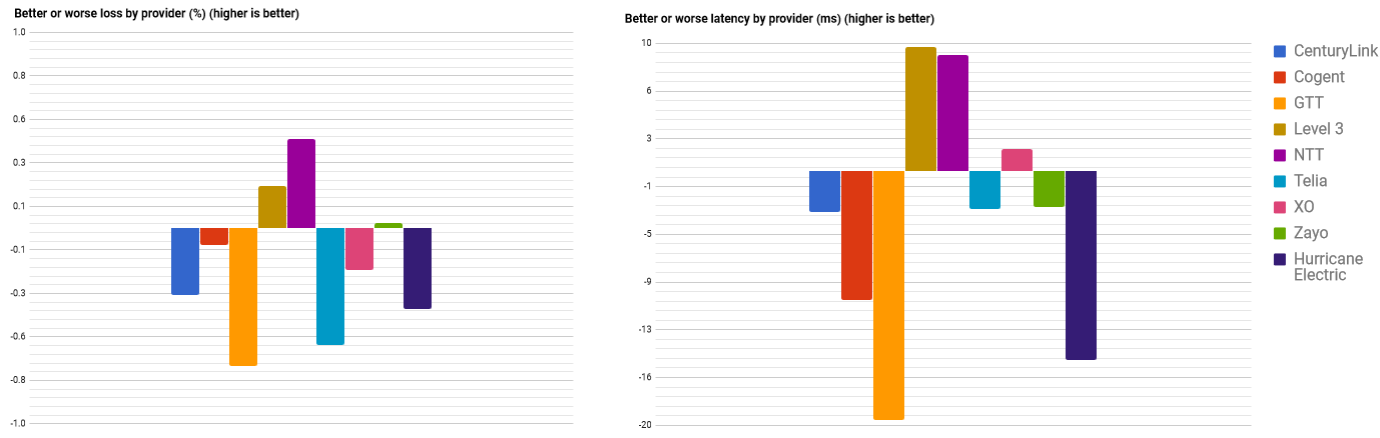 Fig. 3. Better or worse Loss and Latency in December 2017
The numbers are differences from average control group. 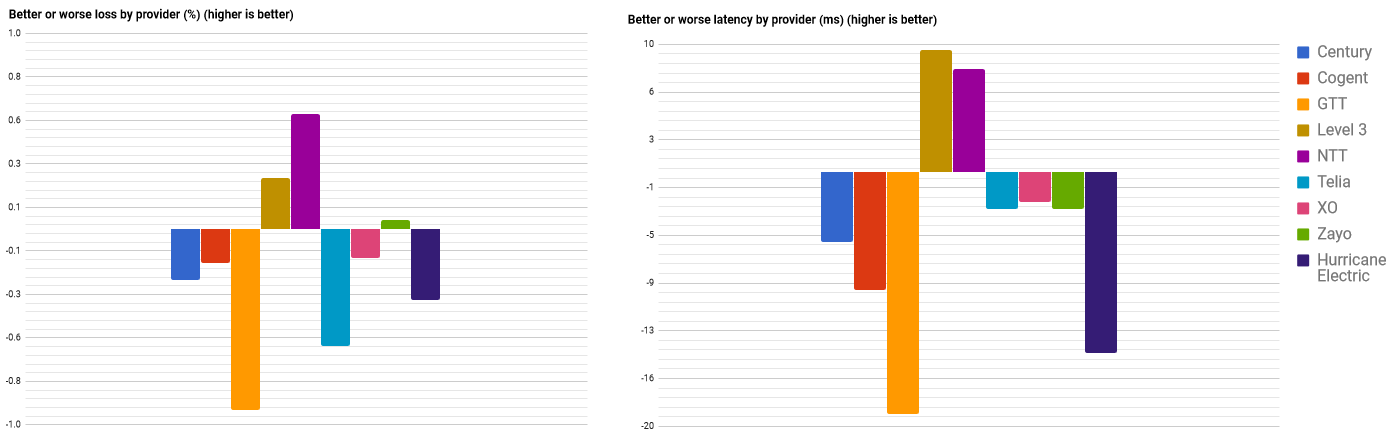 Fig. 4. Better or worse Loss and Latency in November 2017
The numbers are differences from average control group.

In comparison with the control group for the month of December, 2017:

In comparison with the data for the month of November, 2017: 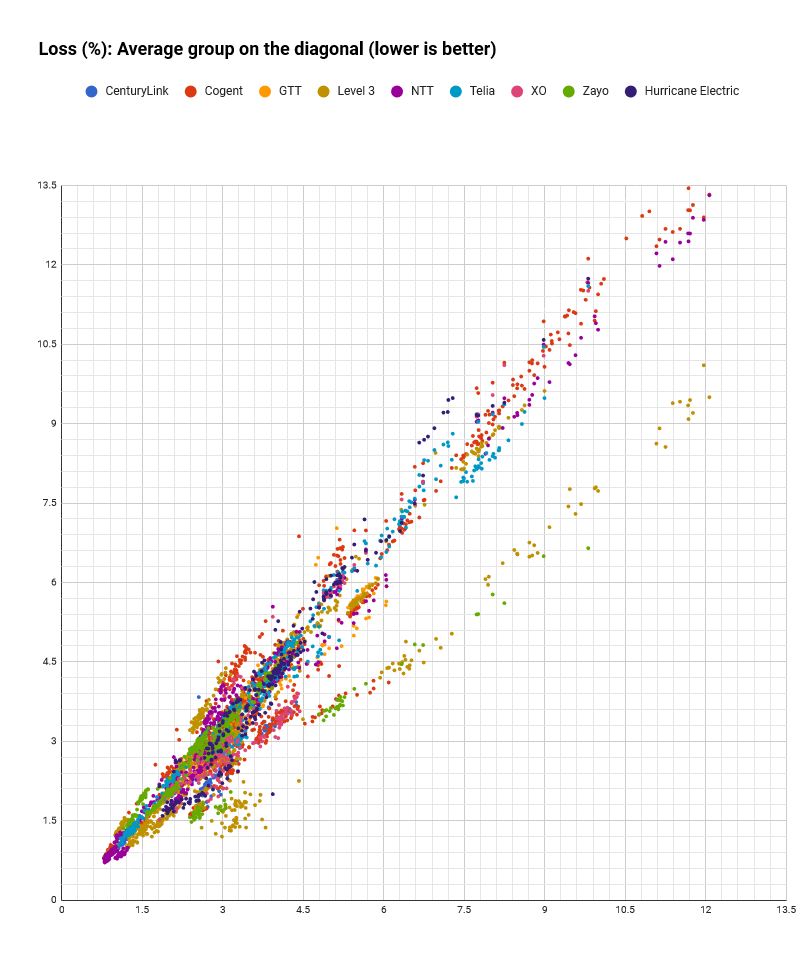 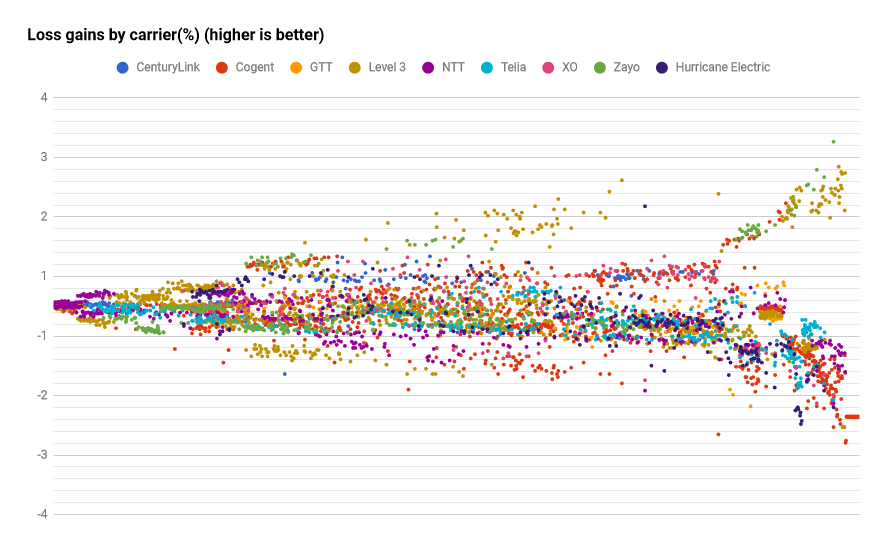 Fig. 7. Average packet loss gains/losses by carrier December 2017
Averages determined for ALL datapoints or a cutoff at 4.5% control group applied.

Fig. 8. Average packet loss gains/losses by carrier November 2017
Averages determined for ALL datapoints or a cutoff at 4.5% control group applied.

In December 2017, based on ALL data-points, the best position in terms of Loss was held by Centurylink, followed by Level 3, XO and Zayo. Other Tier 1s registered poorer results. Centurylink, after the cut off at the 4.5% control group level has been applied, kept the same position as in the ALL data-points representation. Stable results suggest that Centurylink has registered preponderantly lower value of loss for packets which transit it, below the 4.5%. Also, after cut off at the 4.5% control group level, XO showed better results in terms of Loss.

As in November, Centurylink is present in the winner group for both graphics. Telia, Cogent, NTT and Hurricane Electric have considerably worsened the results for ALL data-points. Level 3 and XO have improved their statistics in both graphics and migrated to the winners group. The positive tendency was registered by GTT, however it still maintained the negative results as in December.

For the Latency analysis we use a similar scatter plot to the one we used for Loss. It displays control group values on the diagonal while highlighting individual carrier measurements on the horizontal and on the vertical axis. Datapoints placed significantly and consistently below the average highlight better performing carriers while datapoints above the average highlight worse than average performance. 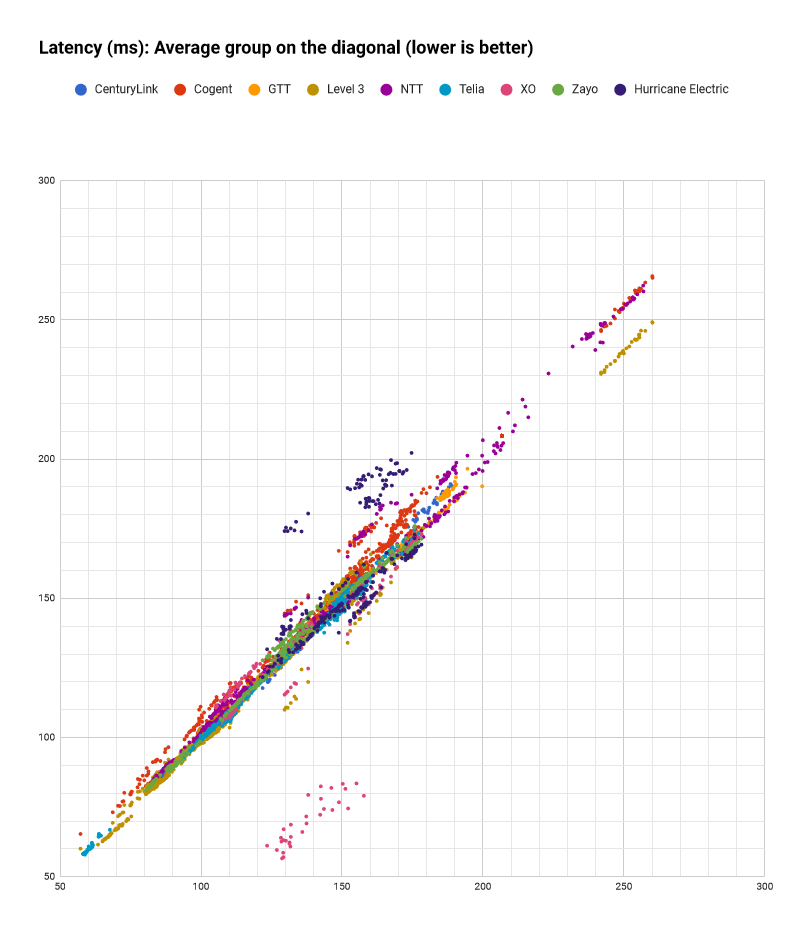 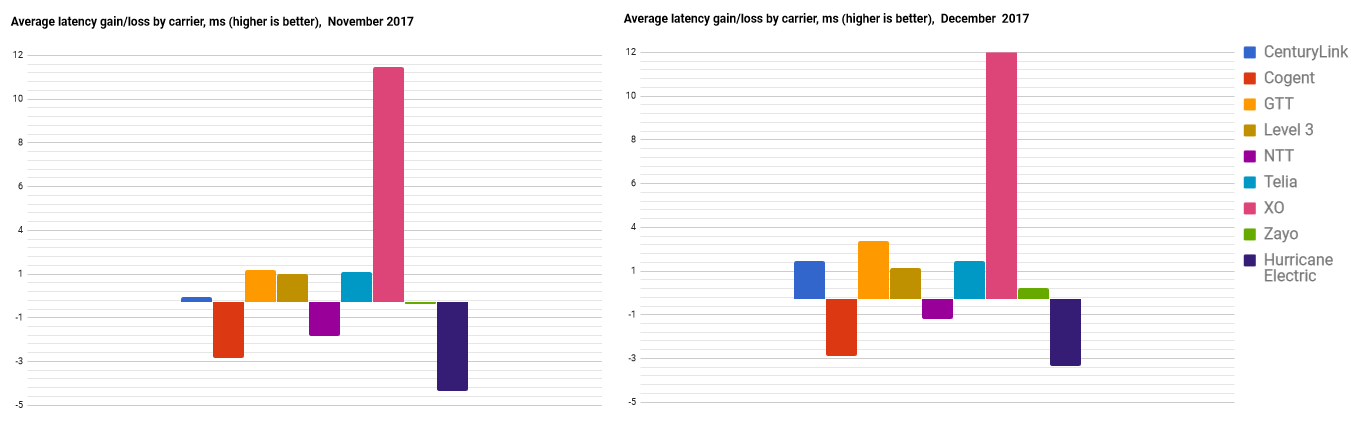 The differences in latency from the control group shown above are averaged with the expectation that better or worse performance will cancel out if the differences are caused by the measurement noise.

The results show that during the month of December in comparison to November: