This analysis covers widely used Tier 1 carriers performance results in the US for the month of April 2017. Rare datapoints from distant locations have not been taken into consideration.

The presented analysis is based on more than 713 million successful probes that span the entire month. All data is aggregated per carrier on a daily basis and accounts for many thousands of successful probes. A control group (labeled C) is used as a base of comparison. The control group aggregates the average for all transit providers in a network, including Tier 1 carriers.

Fig. 1. Average Loss and Latency in April 2017
The numbers include a control group C (gray) to allow cross comparison.

The values for March 2017 are included for cross comparison.

Fig. 2. Average Loss and Latency in March 2017
The charts include a control group C (gray) to allow cross comparison.

When generalizing all registered results, the following can be concluded: average packet loss in April was lower than March for most of the analyzed Tier 1 carriers.

Fig. 3. Better or worse Loss and Latency in April 2017
The numbers are differences from average control group. 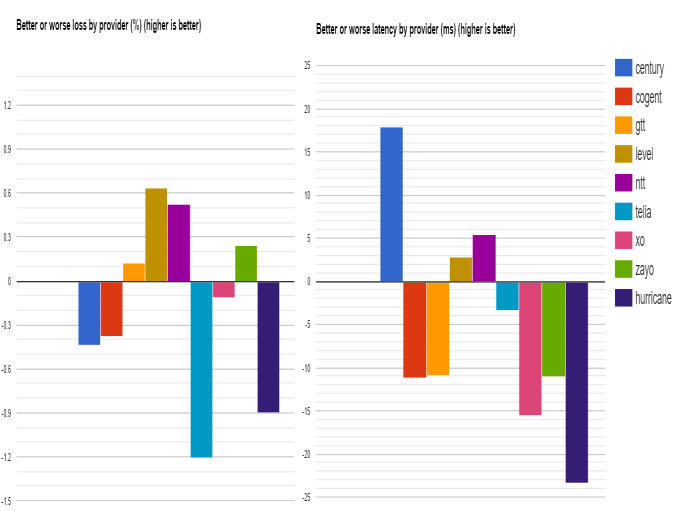 Fig. 4. Better or worse Loss and Latency in March 2017
The numbers are differences from average control group.

In comparison with the control group for the month of April, 2017:

In comparison with the data from March, 2017:

For the Loss analysis we use a scatter plot, where average values by control group are assumed on the diagonal while the horizontal and the vertical axis highlight carrier metrics. All datapoints below the diagonal represent the better performing carriers and vice versa. 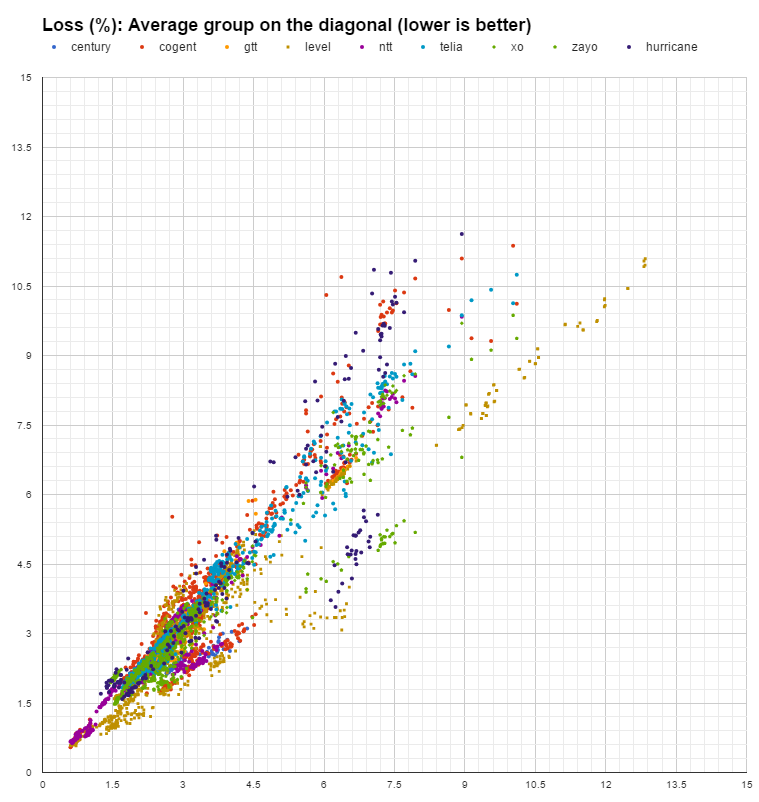 Abnormally large losses are still registered for a large number of datapoints. As was mentioned in previous reports we consider excessive an average above 4.5% packet loss. 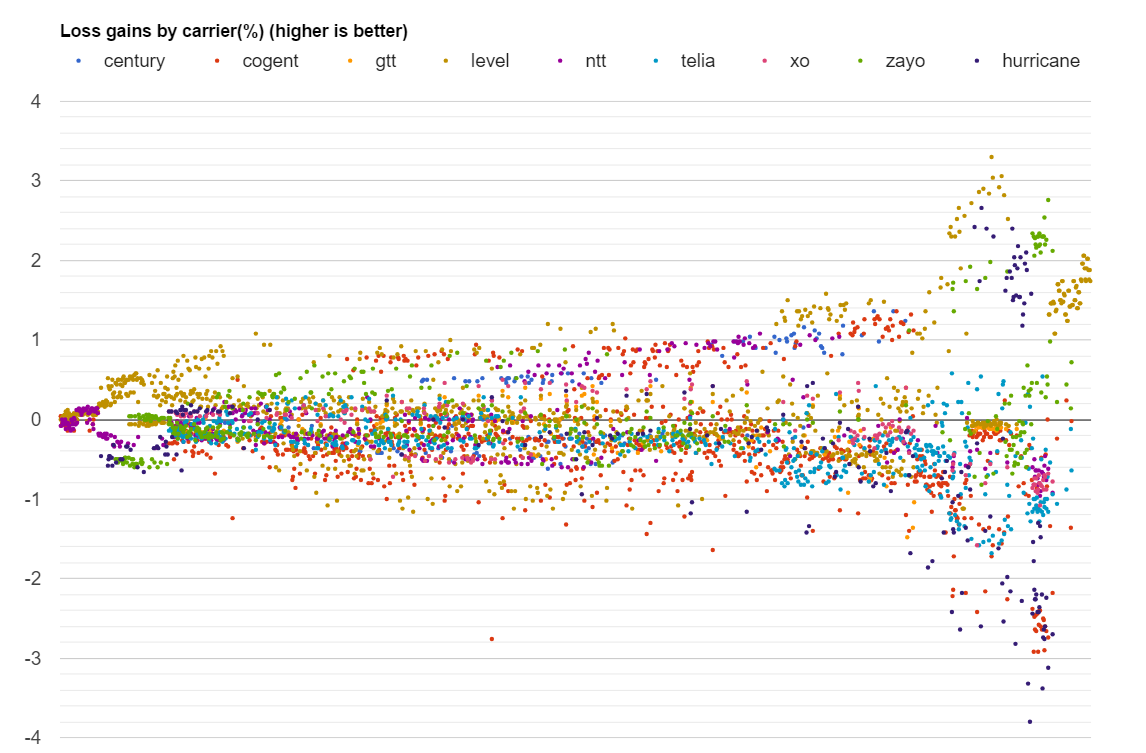 A different representation of the above data places it around the control group (zero line) with gain values by carrier. Values are sorted and charted from left to right by increasing average loss. The chart depicts gains or worsening on a network based on the average control group’s performance – values are shown from left to right following better to worse loss values. The assumption of this analysis is that while a network’s conditions might be better or worse compared to other networks, the conditions tend to be equal across all carriers including the control group. While the carrier’s network is not the culprit causing additional loss, this analysis might be able to suggest whether those carriers peering with remote regions is deficient. Non-systemic issues with carriers will tend to cancel out with values being scattered equally above or below the zero line while systemic issues or gains will have a tendency to place a carrier consistently above or below it. The scatter plot highlights this assumption. 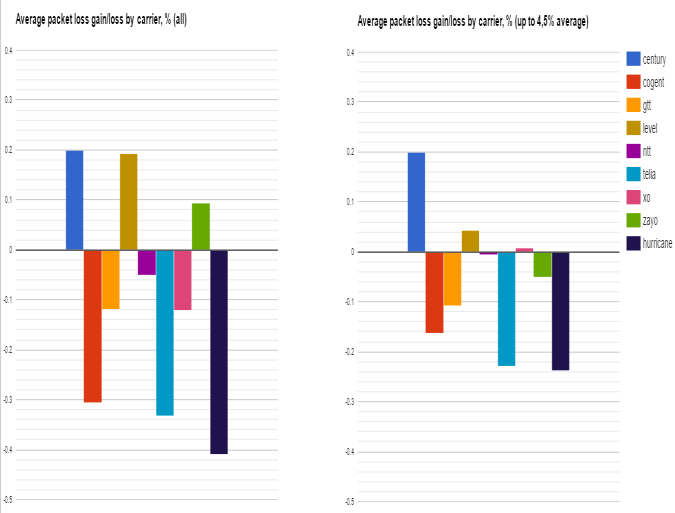 Fig. 7. Average packet loss gains/losses by carrier (April 2017)
Averages determined for ALL datapoints or a cutoff at 4.5% control group applied.

Fig. 8. Average packet loss gains/losses by carrier (March 2017)
Averages determined for ALL datapoints or a cutoff at 4.5% control group applied.

As in March, little differences have been registered between the averages determined for ALL datapoints and the ones that were cut off at the applied 4.5% control group. Zayo, went from gains to losses. Meanwhile, XO showed better results both compared to: April’s cut off at 4.5% control group level as well as the March registered level.

The worst positions show Hurricane, Telia and Cogent. As a result of the applied 4.5% control group to datapoints averages for packet loss, Level 3 position visibly decreased and its leadership became less evident. Much more, after the data set restructuring, Zayo left the group of Tier 1s with better results (Fig. 7). The results show that during April of 2017 in comparison with March 2017: 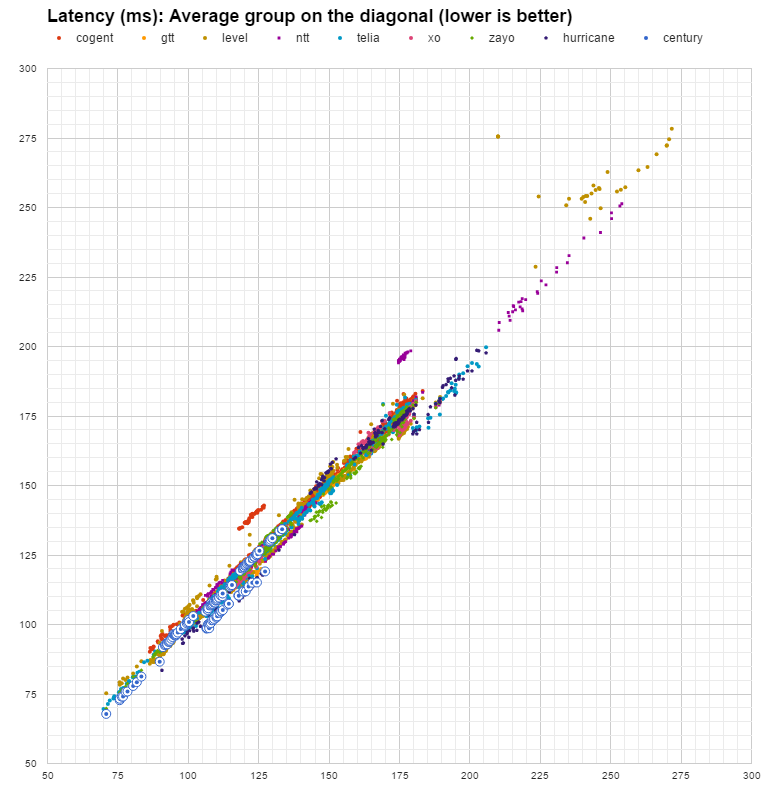 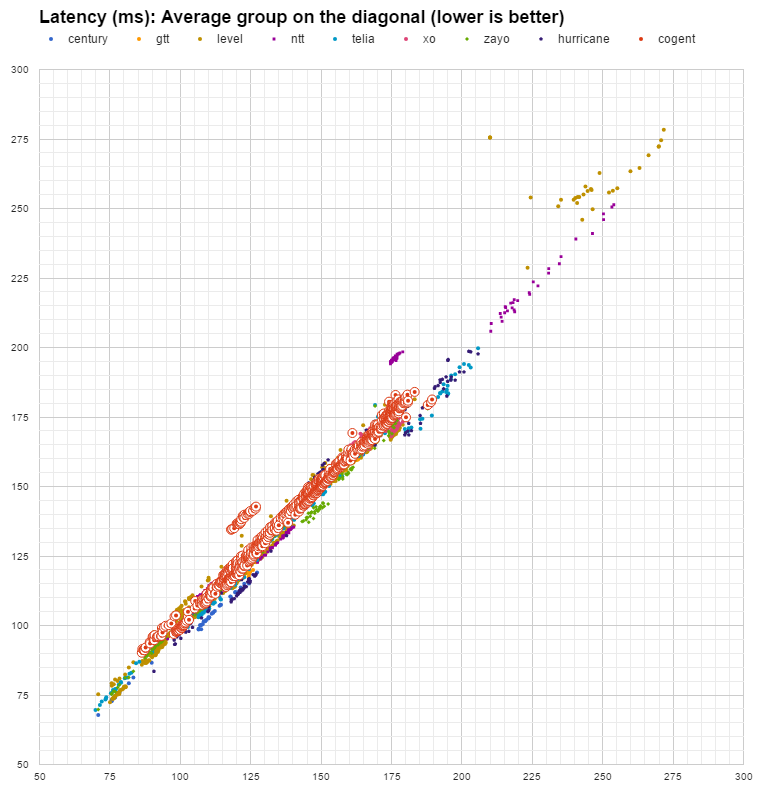 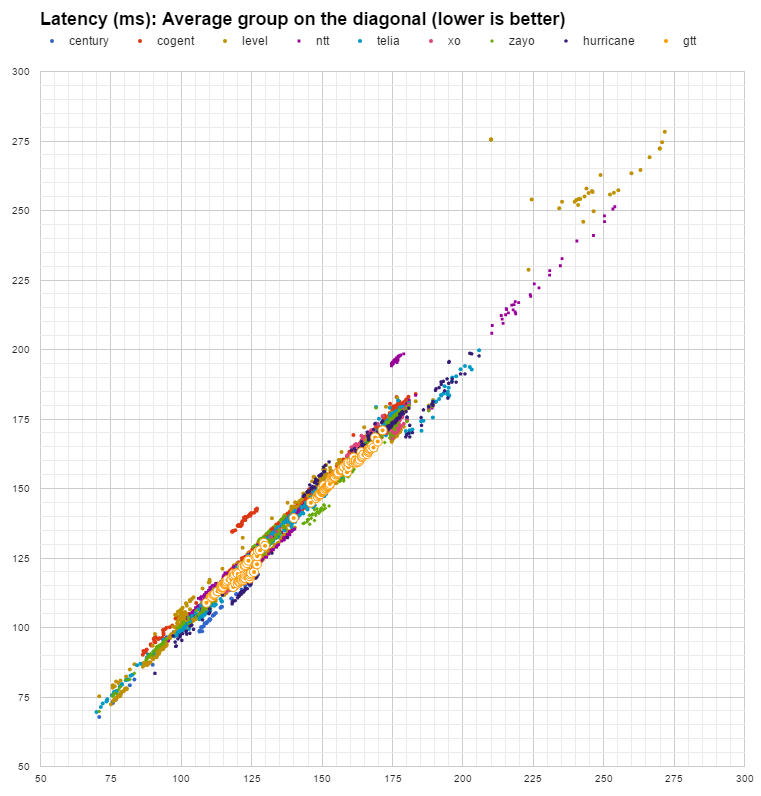 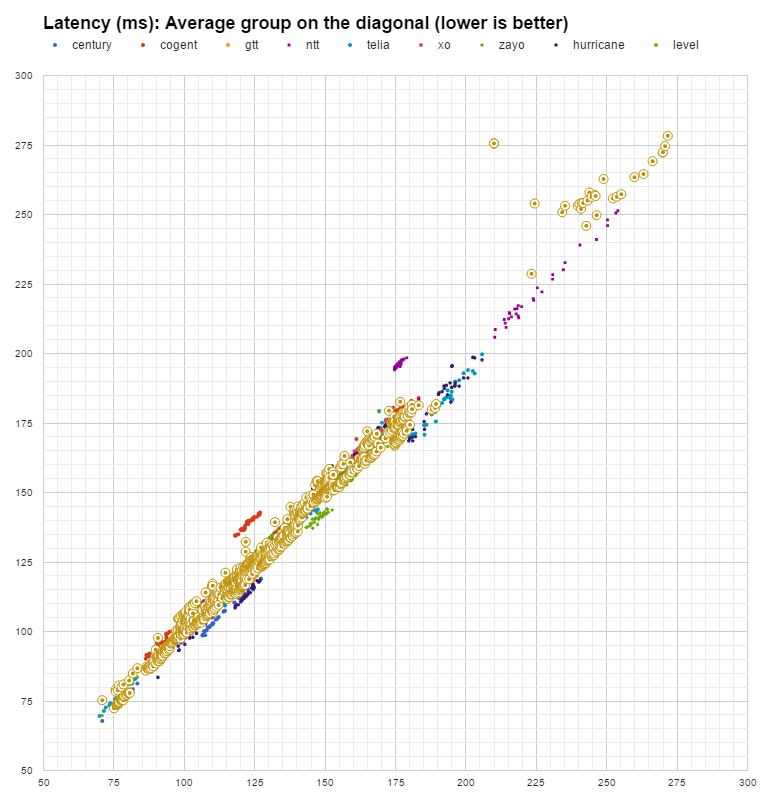 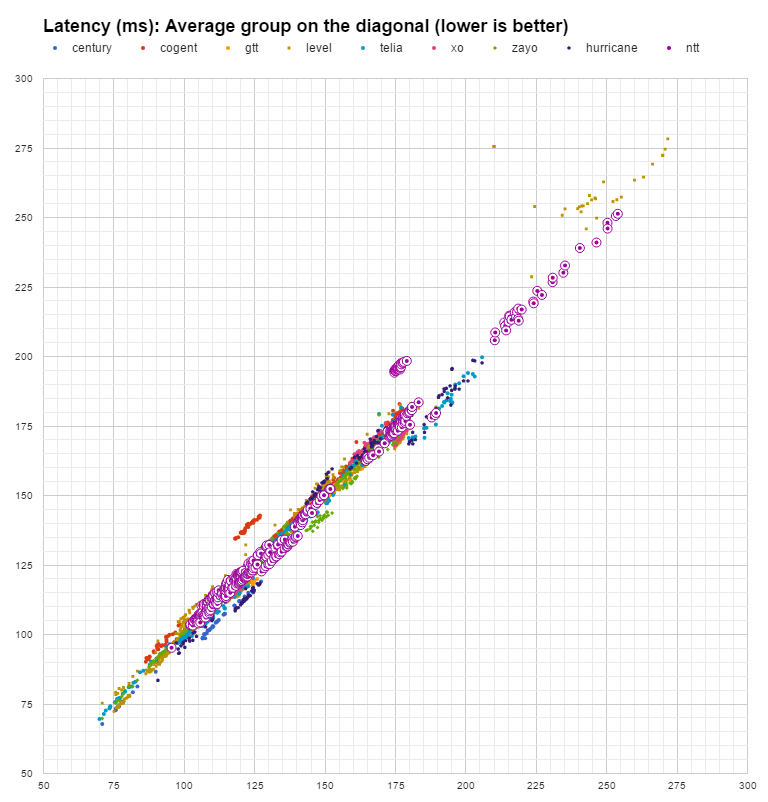 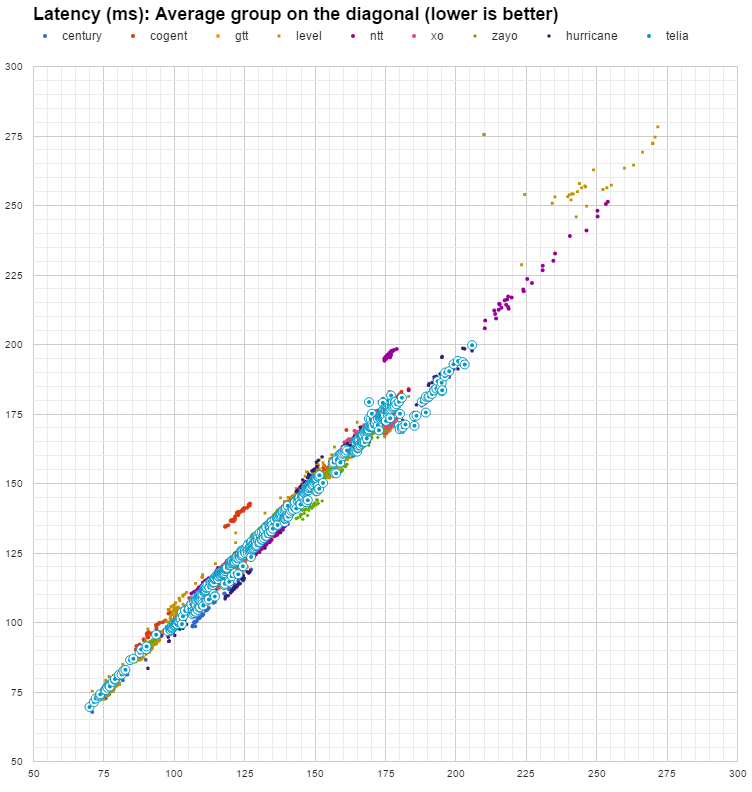 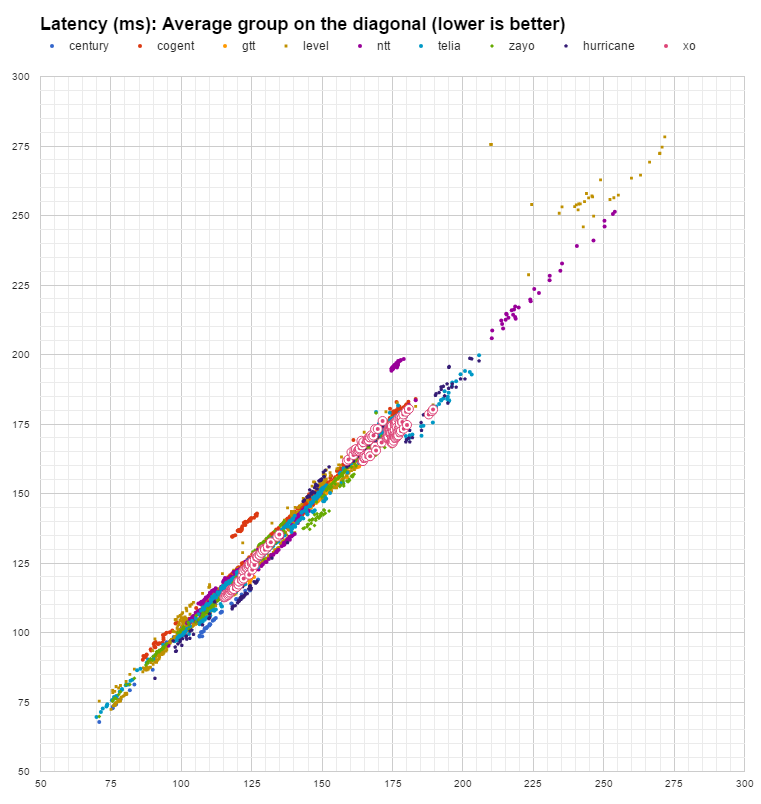 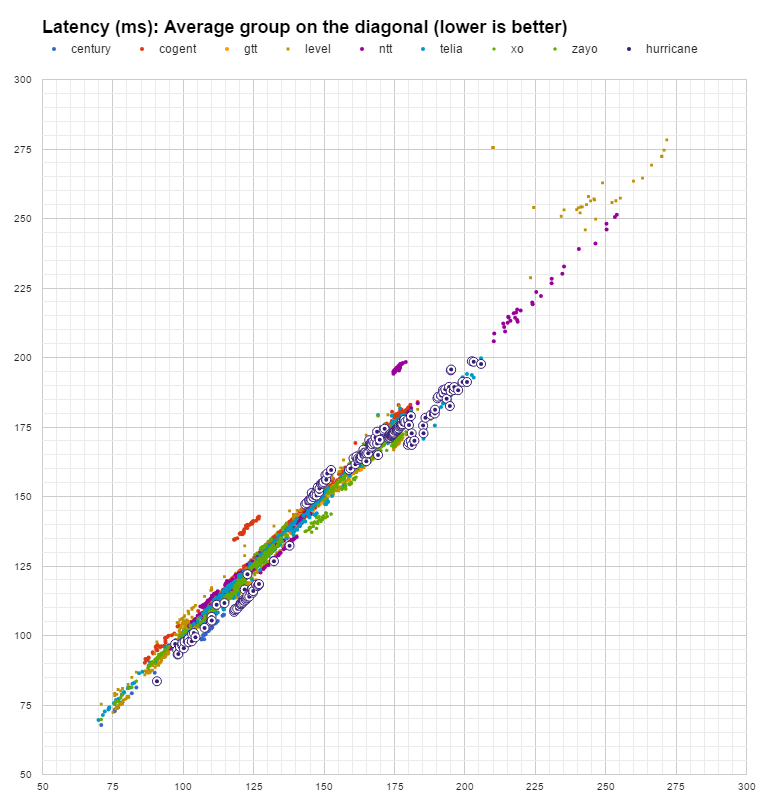 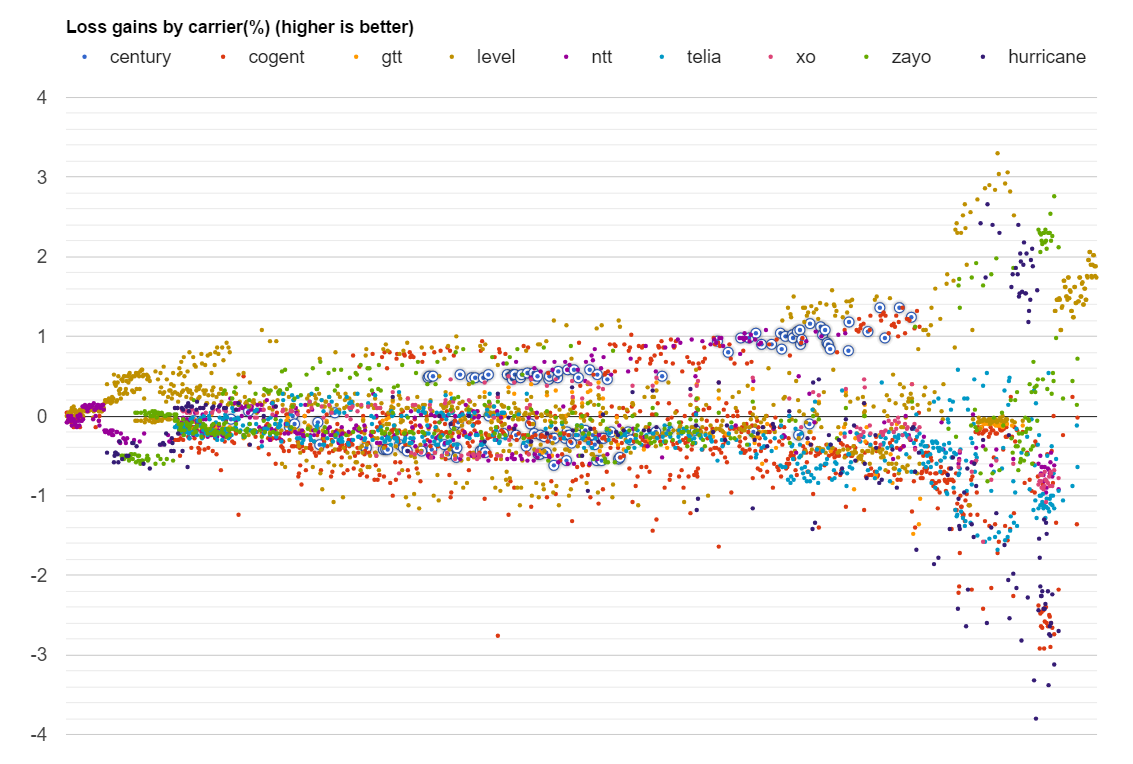 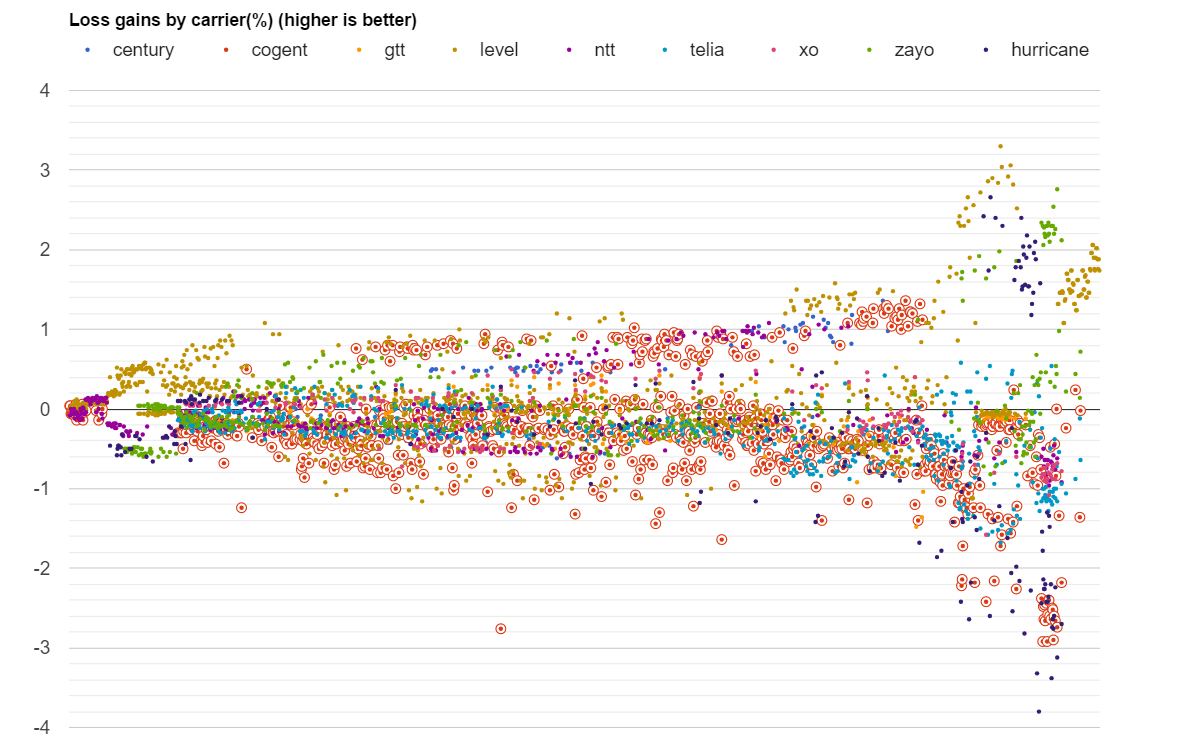 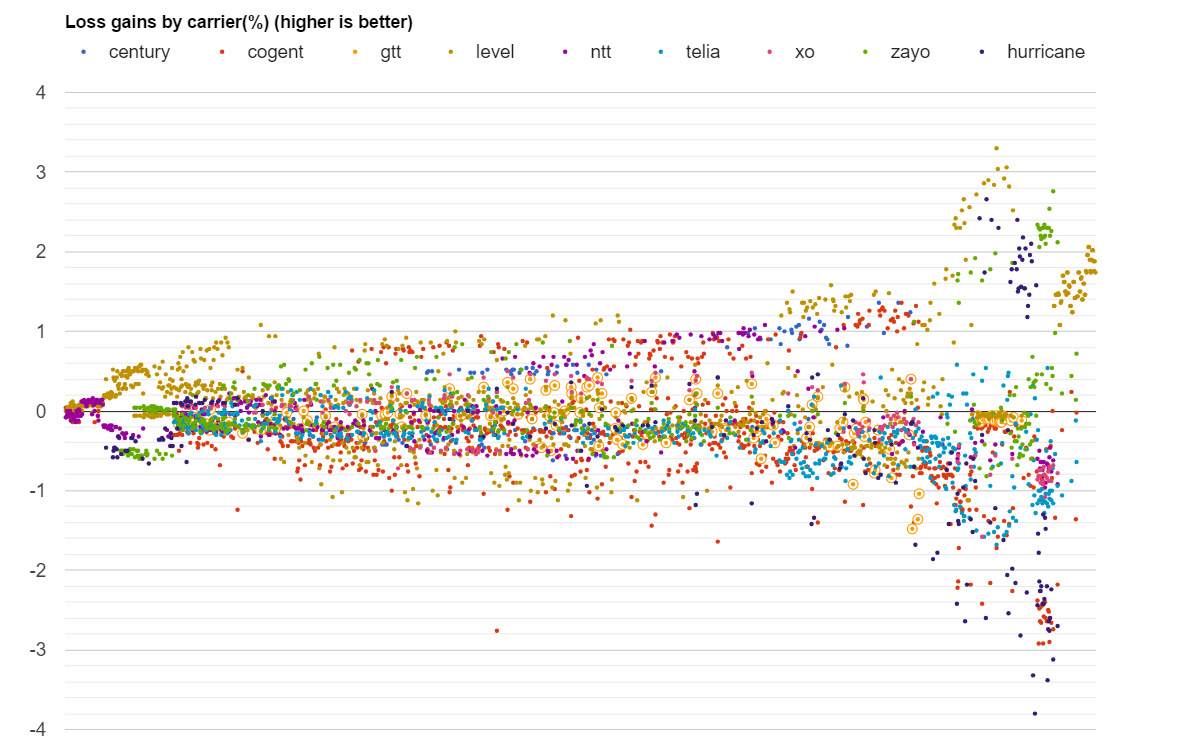 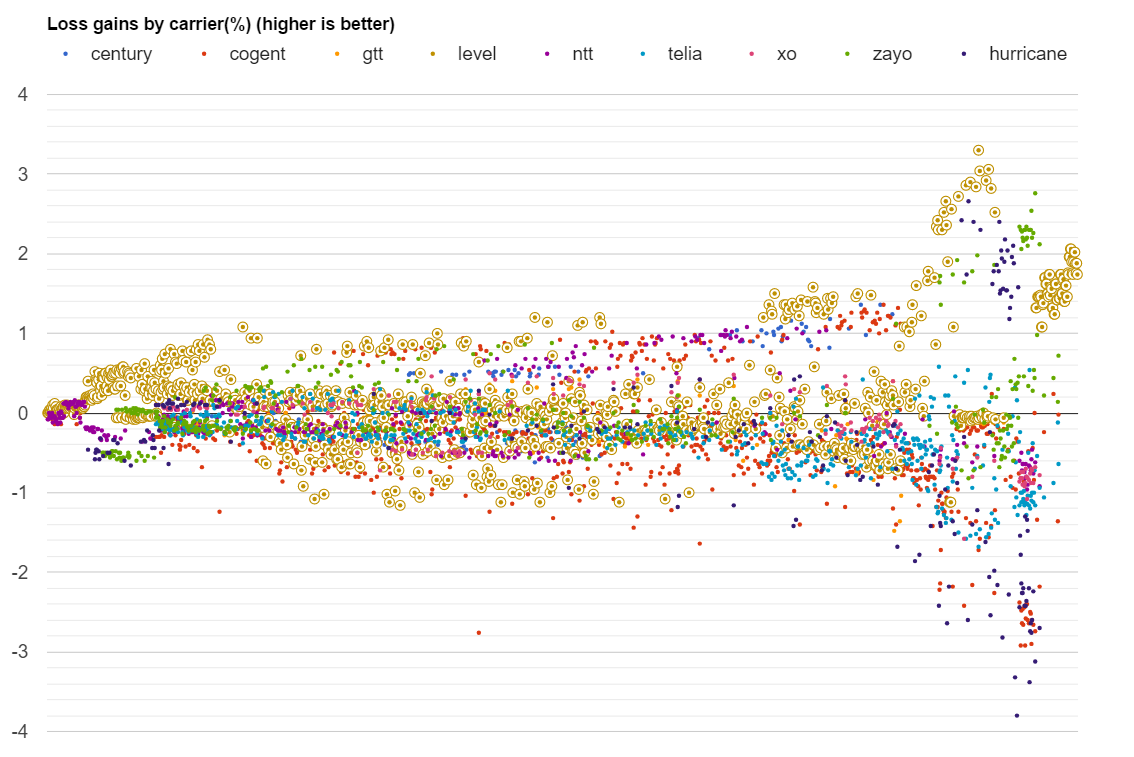 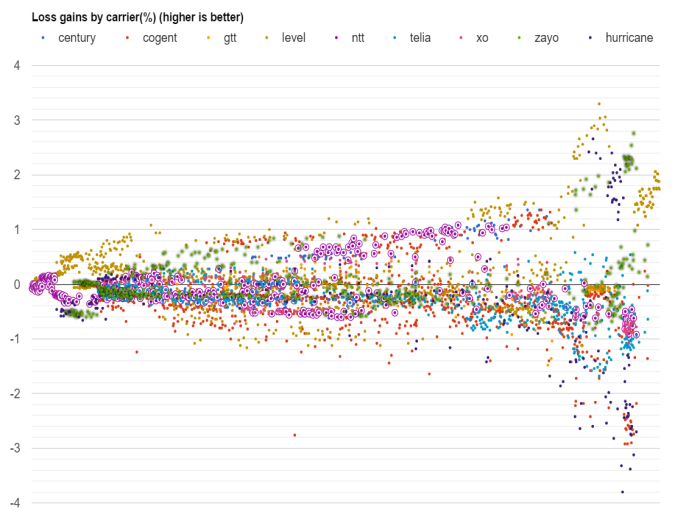 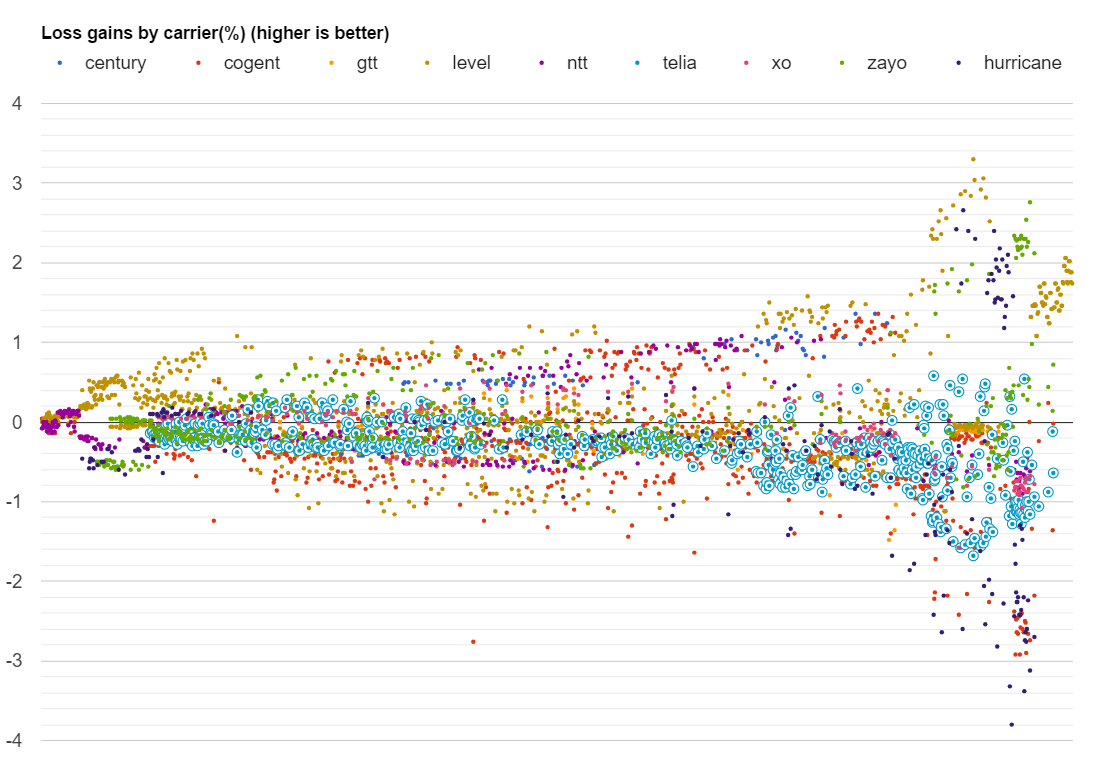 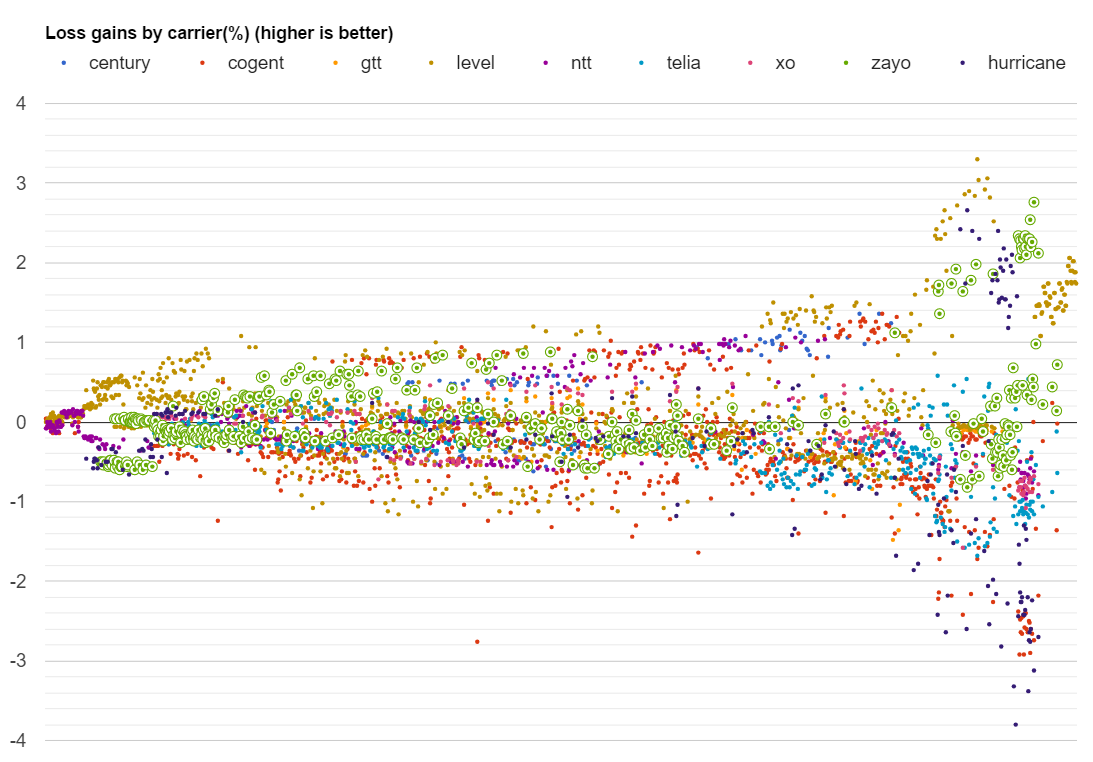