BGP security: an overview of the RPKI framework | Noction
CLOSE

Home Blog BGP security: an overview of the RPKI framework
Rate this post 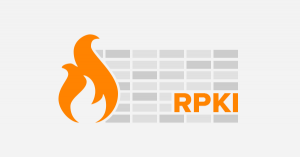 The Resource Public Key Infrastructure (RPKI) system is a way to couple an IP address range to an autonomous system number through cryptographic signatures, described in RFC 6480. IP prefixes and AS numbers are the resources; the public key infrastructure is run by the five Regional Internet Registries (RIRs) that give out IP addresses and AS numbers. (ARIN in North America, the RIPE NCC in Europe, the Middle East and the former Soviet Union, APNIC in Asia and the Pacific, LACNIC in Latin America and the Caribbean and AfriNIC in Africa.)

RPKI leverages the X.509 certificate/public key infrastructure system that is also used with TLS/SSL to authenticate and encrypt HTTP sessions, email, et cetera. The use of X.509 certificates is specified in RFC 5280 and RFC 3779 adds extensions for IPv4 and IPv6 prefixes and AS numbers. The RIRs issue these certificates when a resource is given out. Certificates are typically renewed every year, and unlike the certificates used for HTTPS, there’s no identifying information in them. Each RIR uses a self-signed root certificate to sign the certificates they give out.

Certificates and ROAs are published in publicly accessible repositories, where they can be downloaded and used to generate lists of which prefixes may be originated by which ASes. At this point, the signatures and lifetimes of the certificates and ROAs are checked. If the start date of a ROA (and all the certificates in the chain back to the root certificate) is in the future or its end date is in the past, any the signatures are invalid or have been revoked, the ROA is ignored. All the ones that validate are then used to create a “validated cache”. This is a process that every network executes independently. Then the validated cache is used to generate a filter that is uploaded to the routers.

Routers then check BGP advertisements against this filter, with one of three results: valid, invalid or unknown. The valid state means that there is a ROA matching the prefix and AS number used to originate the prefix. Invalid means there’s a ROA, but the AS number or prefix length doesn’t match. Unknown means there’s no ROA that covers the prefix. A router can then take action based on the RPKI state of a prefix. For instance, this is an example from the Cisco RPKI documentation:

Unfortunately, this doesn’t protect against the case where 193.0.0.0/21 is valid, but a third party tries to get traffic for that prefix using unauthorized advertisements of more specific prefixes, such as 193.0.0.0/24 – 193.0.7.0/24. Those don’t validate and get a local preference of 50, but they still overrule the valid 193.0.0.0/21 advertisement with a local preference of 200, because of the longest match first rule discussed in the previous post.

A more secure approach would be to reject prefixes for which a ROA is present but the advertisement doesn’t validate, i.e., filter out invalids. You would think then if a certificate or ROA expires before a new one is installed, connectivity is lost, and without connectivity, it may prove difficult to generate and upload new certificates and ROAs… But expired (or not-yet-valid) certificates and ROAs are simply ignored, so the prefixes in question revert to unknown rather than invalid and thus remain reachable.

This is a similar example from Juniper’s RPKI documentation:

Please see the documentation at your RIR for more information on how to get certificates for your IP addresses:

RIPE has an RPKI tools and resources page, where, amongst other things, you can download an RPKI validator. They also run a Cisco router that you can access over Telnet to try out a few RPKI commands at rpki-rtr.ripe.net (user ripe, empty password) and a Juniper at 193.34.50.25 and 193.34.50.26 (user rpki, password testbed). RIPE also has an RPKI validator where you can view a lot of RPKI information online.