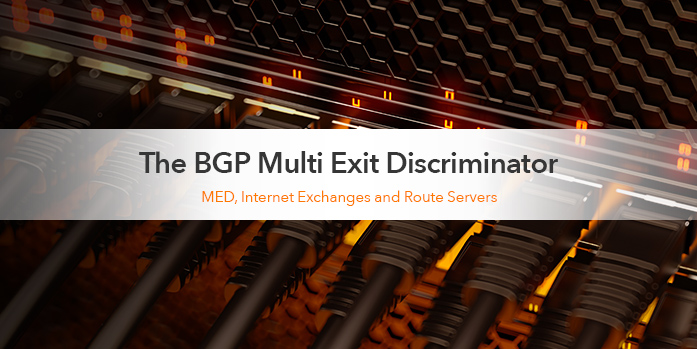 In the BGP path selection algorithm, the MED comes into play when there are multiple paths to a destination prefix that have the same local preference and the same AS path length. And, unless we configure always-compare-med, MEDs for different paths are only compared for paths towards the same neighboring AS. In other words, the purpose of the MED is to select the best path when there are multiple connections between two autonomous systems. Today, we’re going to focus on optimizing traffic flow between two networks that interconnect using multiple routers connected to one internet exchange, but the same applies to interconnecting using multiple internet exchanges in the same region.

When you connect two routers to the same internet exchange—or, more generally, use two routers in the same location to connect to external networks—it’s best practice to set up BGP sessions to/from each router. So if networks A and B interconnect over an exchange and both networks have two routers connected to the IX, this will result in four BGP sessions as show in figure 1. 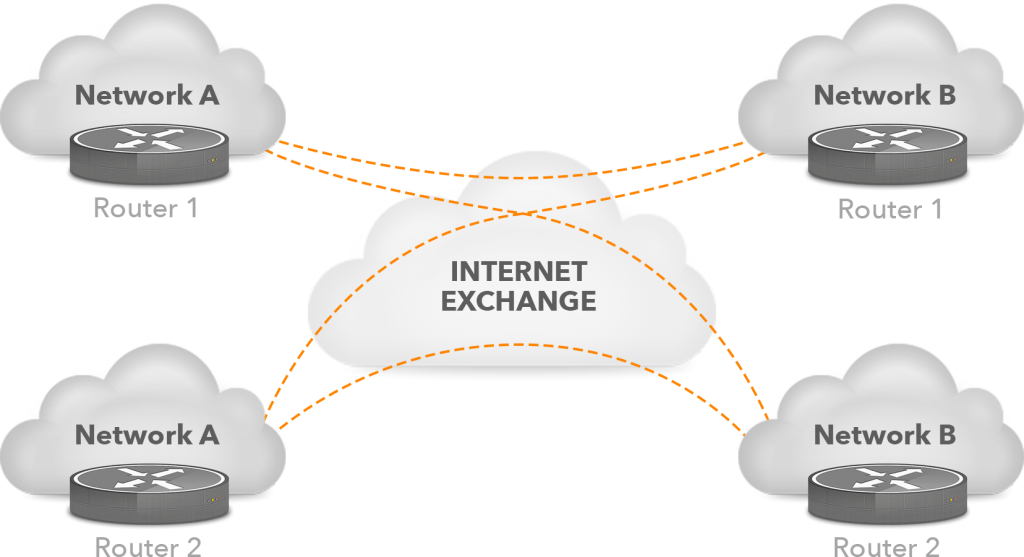 If you then let the BGP path selection algorithm choose the best path without adjusting any of the BGP attributes, all the attributes will be the same.

So without further action, most of both incoming and outgoing traffic will flow through the same router. This may actually be desirable when capacity isn’t an issue, as this makes the traffic flow predictable and debugging problems easier. Having all traffic flow through one router can also be useful if that router is faster, or has a higher capacity link to the IX or to the internal network. However, in that case you’ll probably want to explicitly choose which router handles the traffic rather than depend on the BGP tie breaking rules.

For incoming traffic, you can do this by advertising your prefixes with different MEDs through both routers. For instance, this configuration sets the MED to 10:

Also, remember that the MED only survives one inter-AS hop. So sending different MEDs towards a neighboring AS will influence how you receive traffic from that AS, but networks that are two or more AS hops away won’t see the MEDs; if you want to influence routing decisions in those networks, as well as in networks that ignore advertised MEDs, you’ll have to perform AS path prepending or announce more specifics.

If we want to influence outgoing traffic, we’ll have to adjust incoming MEDs. This could be done by applying the same setmed10 route map from the example above as in on a BGP session. However, that makes you one of these impolite networks that doesn’t honor their neighbor’s MEDs. So usually, it’s better to adjust the MEDs your neighbor sends you rather than simply overwrite them:

If the neighboring network has a similar configuration, they will be sending an MED of 10 from their primary router and 20 from their secondary router. This will result in the following MED values:

So under normal circumstances, the traffic will flow from R1 to R1, with either R1 to R2 or R2 to R1 as a backup when there is an outage, and only from R2to R2 as a last resort.

If you don’t really care that much which router handles the traffic, you may choose to optimize traffic flow slightly by prioritizing shorter, more local paths. For instance, suppose the IX is present in locations A and B, and you’re connected in location A. Some of your peers will have routers in both locations A and B. All else being equal, it would be somewhat more preferred to exchange traffic with a neighboring AS through their router in location A. The path will be somewhat shorter, there is less layer 2 equipment in the middle that could fail, and if your router and the remote router are connected to the same Ethernet switch, the only bottleneck between the routers (other than their IX connection) will be the backplane of the IX switch. Switch backplanes are rarely a bottleneck, but the backhaul link between the IX switches in two locations could be. So in this case, you’ll have to determine the location for each neighboring AS’ router and apply different MEDs based on that like in this configuration:

Note that this configuration is equally useful if you only have a single router connected to the internet exchange.

If you have two routers and optimizing traffic flow to keep it local isn’t relevant, you can use a similar configuration to better balance traffic between the two routers as follows. On one router, we apply the same MED to all neighbors to have a consistent baseline:

Then, on the other router, distribute the neighbors over peer groups med10 and med20 until traffic is reasonably balanced:

Route servers and propagating the MED

Most internet exchanges have route servers to facilitate easy peering between IX members. Without route servers, each IX member has to set up BGP sessions towards every other member they want to peer with. On a large exchange with as many as a hundred or more members, this is a lot of work and prospective peering partners don’t always reply quickly when contacted. By connecting to a route server, you immediately have peering with all the other IX members connected to the route server.

Route servers are almost always deployed in pairs; each router maintains a BGP session with each of the two route servers to avoid having a single point of failure. It’s standard behavior for BGP routers to detect that two neighbors are connected to a common subnet and then not adjust the next hop address in BGP updates. This way, even though the route sever is in the path from the perspective of the flow of BGP updates, the route server is not on the data path: packets are directly sent between peers as if the route server isn’t present. See figure 2. 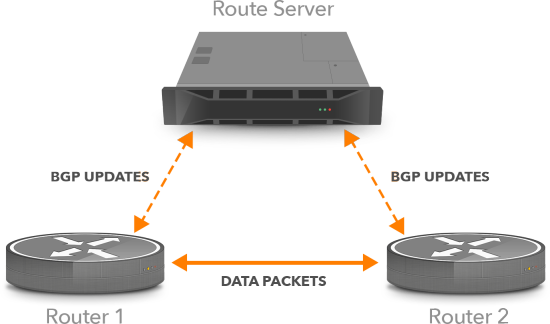 Today, it’s common for route servers to not apply the eBGP rules for updating the BGP attributes. Recent versions of Cisco IOS make it possible to enable this behavior as follows:

As you can see in the example, the route-server-client setting is specific to an address family. (If you’re only using IPv4 you can leave out the address-family and activate lines.) So it’s possible to have a neighbor be a route server client for IPv4 and not IPv6, or the other way around.

With this setting in effect, the router will not update the next hop, AS path or MED attributes like it normally would for updates sent to eBGP neighbors, but rather, pass on these attributes unmodified. So for all intents and purposes, the presence of the route server is invisible.

“If the UPDATE message is received from an external peer, the local system MAY check whether the leftmost (with respect to the position of octets in the protocol message) AS in the AS_PATH attribute is equal to the autonomous system number of the peer that sent the message. If the check determines this is not the case, the Error Subcode MUST be set to Malformed AS_PATH.”

And there may still be a few routers that don’t accept the route server behavior, but can be told to do so:

Using the MED in a Route Server

With the subtleties of route server behavior out of the way, we can have a look at using the MED in route servers. Suppose an internet exchange is present in two locations, as per figure 3. 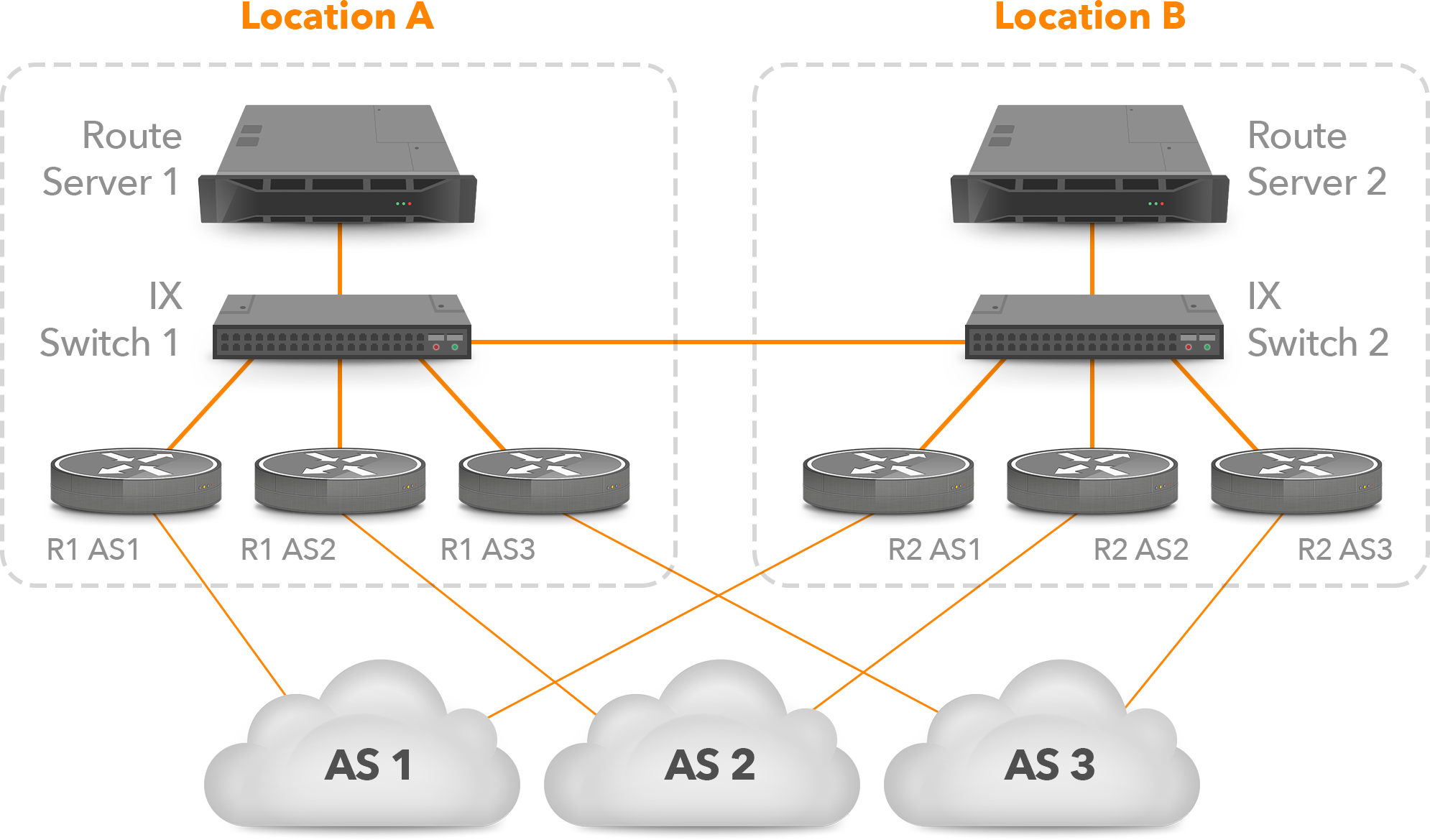 Three networks each have a router at both of the IX locations, where they connect to the local IX switch. The switches in the two locations are connected through a high capacity link so that networks can deliver their traffic at either location. But as we saw earlier, if two networks are connected to both locations and don’t express a preference for the path over one location, the BGP tiebreaking rules will kick in, and there’s a good chance that AS 1 will use its router 1 to send traffic to AS 2 router 2. So this traffic has to flow through the switch in location A, through the link between the two locations, and then through the switch in location B.

So the IX could apply a configuration to the route servers to prefer local paths over paths that go through both locations. A slight adjustment to the MED works well in this situation because it doesn’t overrule the preferences expressed by the connected networks. The route servers would then apply the following configurations:

Assuming the member routers send prefixes with a MED of zero or no MED on their prefixes, this means that the route servers will have prefixes with the following MED values in its BGP table:

(The > indicates the best path.)

But if the route-server-client setting is in effect, the MED in the route server’s BGP table will be propagated after the relevant MED adjustment route map is applied: