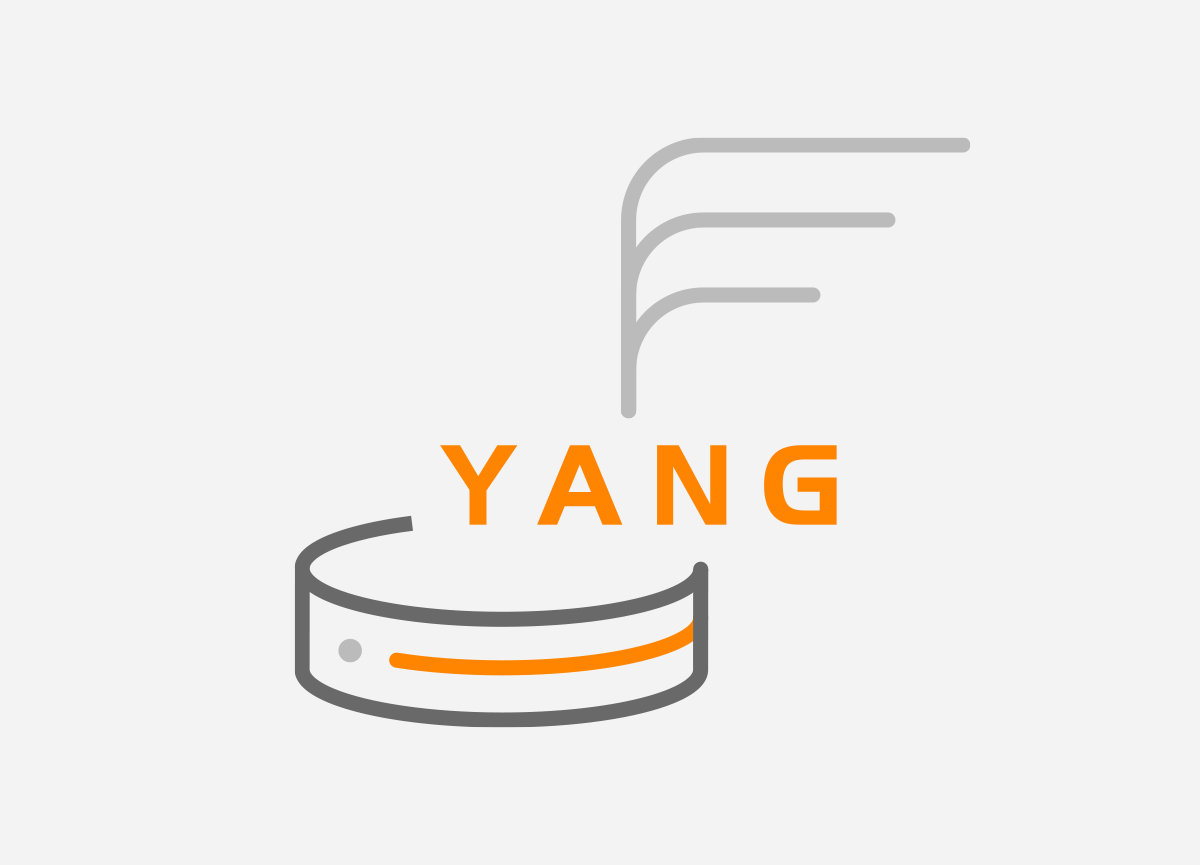 Yet Another Next Generation (YANG) RFC 6020 is standard-based data modeling language for the NETCONF management protocol. YANG is used to create device configuration requests or requests for operational data.  NETCONF and YANG provide the tool that network admins use to automate configuration tasks across devices from different vendors.

YANG is a module-driven language such as Python. A module defines a single data model. The module can import external YANG modules or include one or more sub-modules. For example, Cisco-IOS-XE-bgp.yang vendor-specific module imports five external modules (Figure 1).

The YANG data model defines the configuration and state data, notifications, and RPCs for use by NETCONF. For example, a data model for a network device will control interfaces, while the model configuring a service will be used to configure services such as BGP.

YANG models data using a hierarchical tree-based structure consisting of nodes (Figure 2). The RFC 6020 defines four types of YANG nodes. Each node has a name, and depending on the node type, the node may either define a value or contain a set of child nodes.

Figure 2 shows the YANG data model example with the appropriate CLI configuration on the right. The data model has a hierarchical configuration, and it is human readable.

Where are the YANG Modules Stored?

YANG models are installed automatically on devices such as CSR1000v (IOS-XE) and can be updated on some devices. They can also be downloaded from Github and uploaded to the device.

YANG has been widely adopted by key standard organizations such as the IETF and working groups such as OpenConfig.

The IETF standardized YANG data models provide limited functionality but can be used across multiple vendors.

Native or vendor-specific YANG data models provide the greatest feature coverage, but they work only on specific vendor devices. For Cisco devices, the models are OS unique. For example, there are separate YANG data models for IOS-XE, IOS-XR, NX-OS, etc.

The YANG data model for the BGP-4 protocol described in the IETF draft is defined across several YANG modules and covers:

The model is vendor-neutral to allow operators to manage BGP configuration in environments with routers supplied by multiple vendors.

YANG models do not contain data or Extensible Markup Language (XML); they are used as templates for generating structured data in different formats such as XML or JSON. YANG models are used in conjunction with the Network Configuration Protocol (NETCONF) and RESTCONF protocols for configuring networking equipment.

NETCONF is a standard-based XML encoded network management protocol. NETCONF provides the transport via SSH protocol to communicate the YANG formatted configuration or operational data request from an application that runs on a management workstation (NETCONF client) to the network device (NETCONF server) that a user wishes to configure or request operational data from.

In our example, the CSR1000v router running Cisco IOS-XE 16.07.01 is used as the NETCONF server. This is the device that is configured and from which data (show command output) is being collected from via NETCONF/YANG.

A virtualized Ubuntu server is a NETCONF client which acts as the centralized management platform by utilizing the Cisco YANG Suite application. It is the device creating the YANG formatted requests sent to the CSR1000v via NETCONF RPC (Remote Procedure Call) messages to configure and collect data from the NETCONF server.

Use SSH to establish NETCONF session:

Now we can access the YANG Suite at http://localhost. Log in with the username and pass you entered during installation.

Configure YANG Suite to connect to CSR1000v “Setup –> Device profiles”. Click “Create new device” and fill the “General Info” path and “NETCONF” configuration (Figure 4). We can check if we can connect to CSR1000v by clicking the Check connectivity button.

Now we need to upload YANG model files from our computer to YANG Suite at “Setup –> YANG files and repositories”.

Navigate to Setup-> “YANG files and repositories”. Select the “Upload” Tab and click the “Browse” button. Navigate to the path where yang files are saved (Figure 5). Select modules that you need. 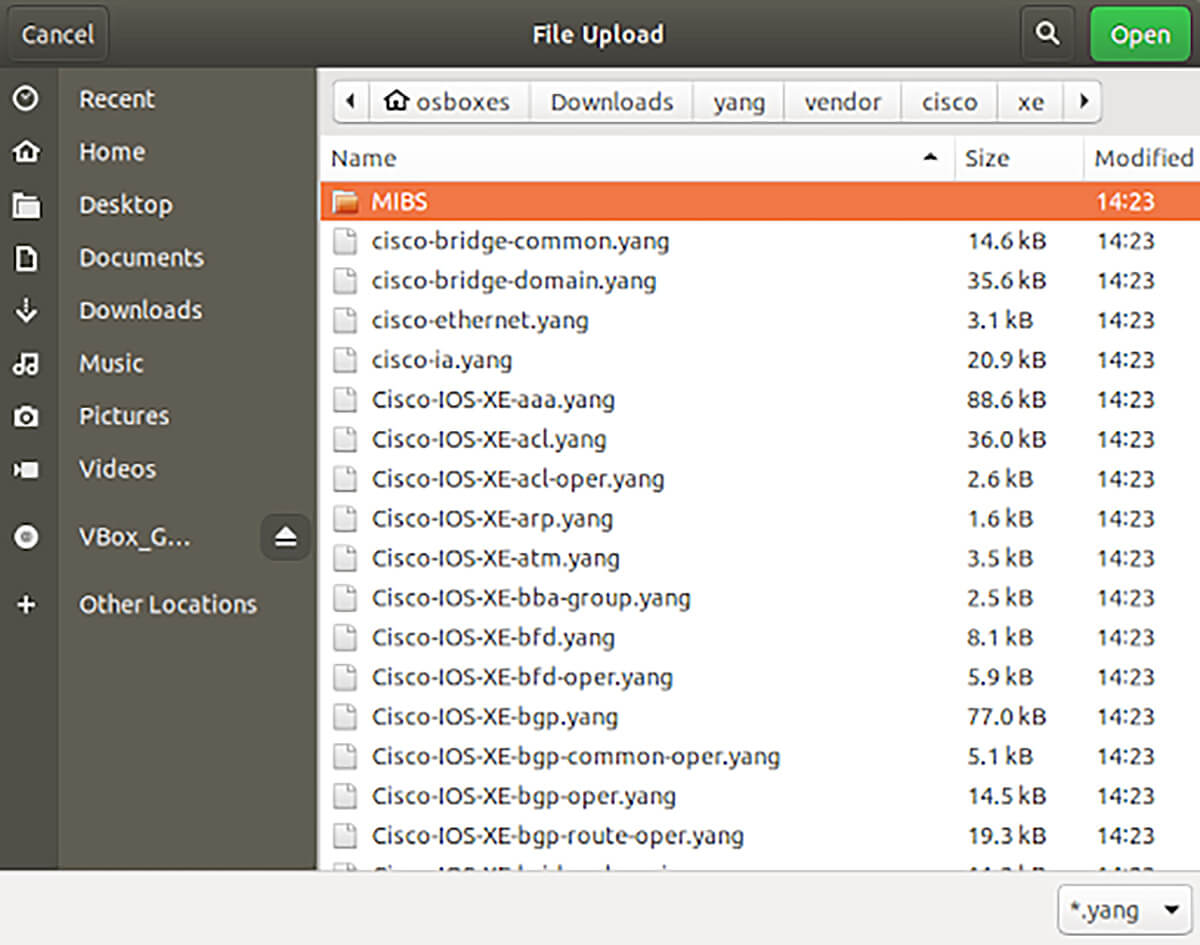 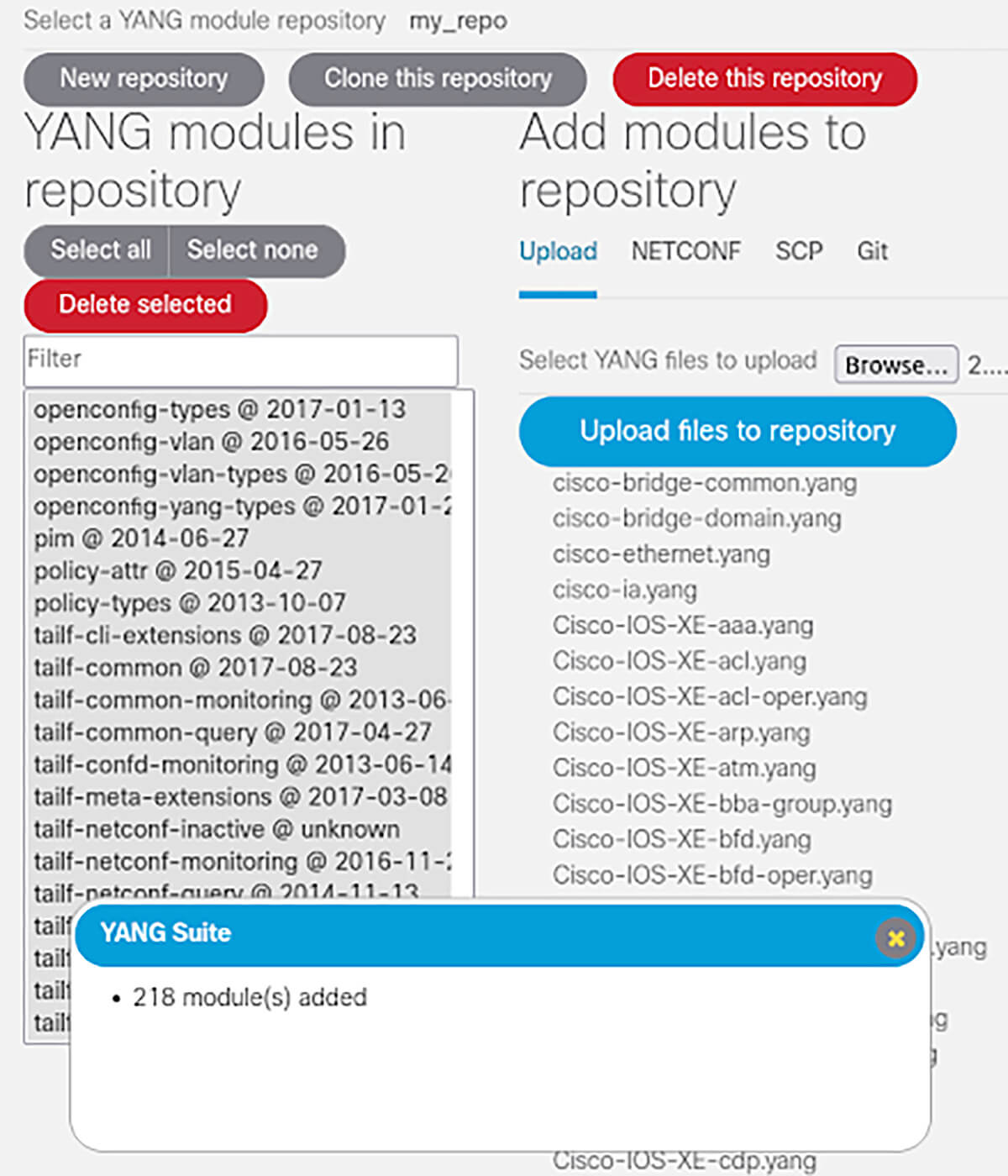 Once we have provided YANG models to YANG Suite, we can then proceed to define sets of YANG models of interest or the entire models at “Setup –> YANG module sets” (Figure 7). 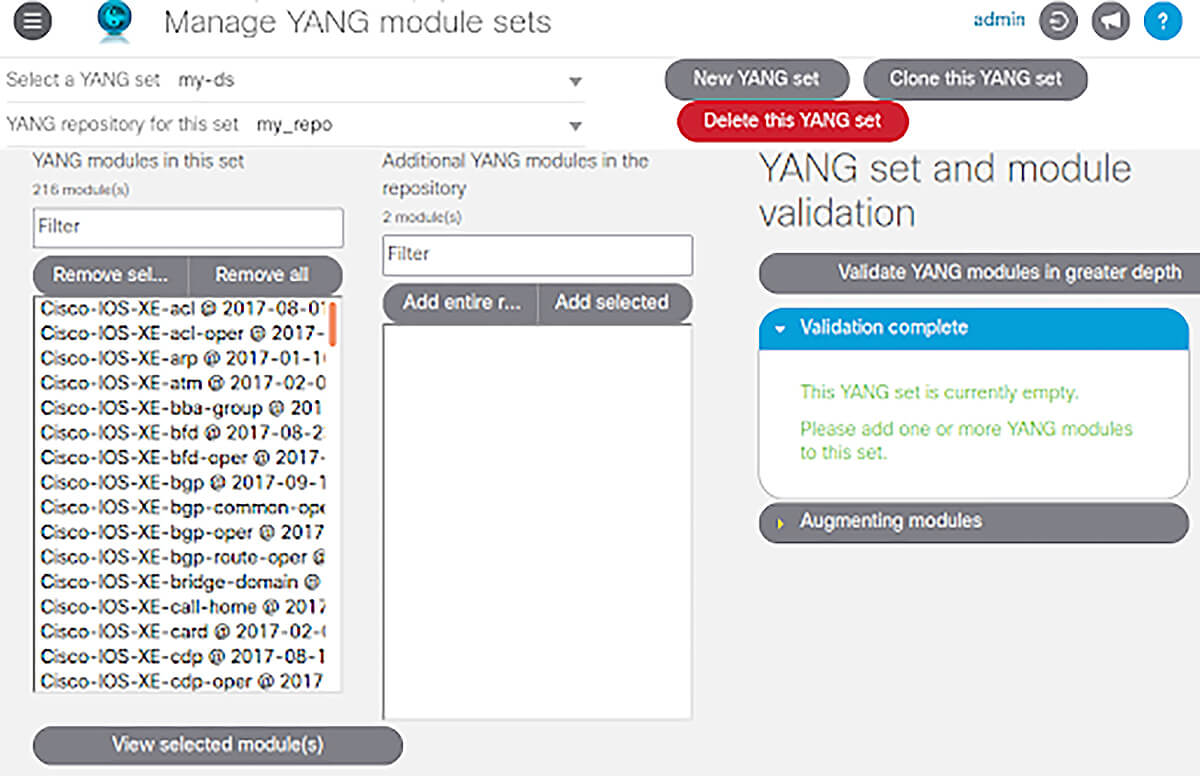 Once this is done, we can proceed to learn how to explore the contents of these YANG models at “Explore –> YANG”, or use these models to send NETCONF at “Protocols –> NETCONF”.

The desired operation is selected from the left side of the Explorer section of the Yang Suite application GUI. In our case, to configure BGP is required on the CSR1000v and so Config (for configuration) is selected, followed by the required operational parameters under the ios-bgp:bgp drop-down menus (Figure 9). 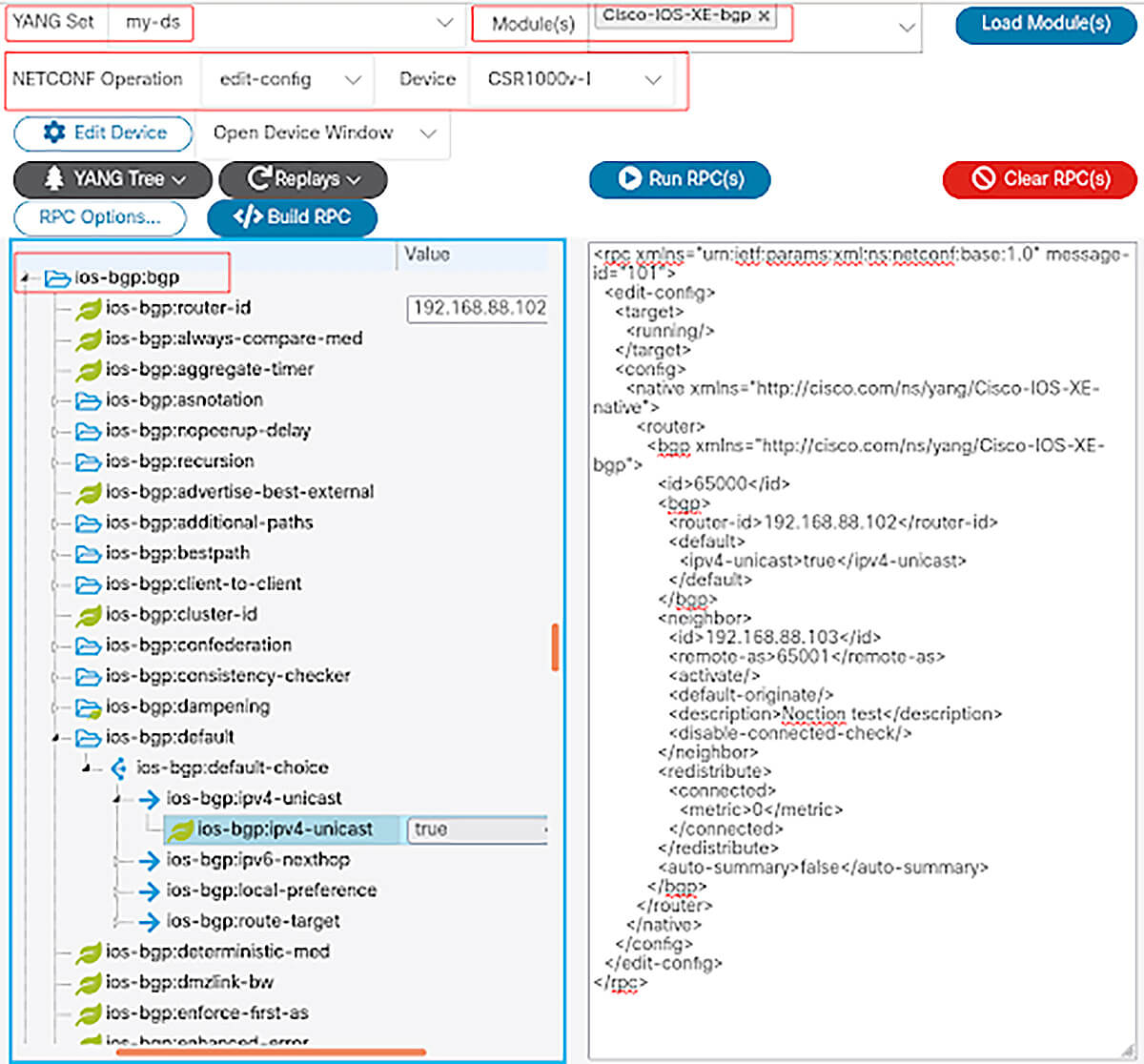 Once you have finished BGP configuration, press “Build RPC” to generate the YANG formatted (human-readable) NETCONF RPC that must be sent to the CSR1000v via NETCONF to execute the configuration task.

After the YANG formatted NETCONF RPC message is generated, press “Run RPC(s)” to send it to the router. The CSR1000v replies with a YANG formatted (human-readable) message that states that the configuration operation was successful (ok) (Figure 10). 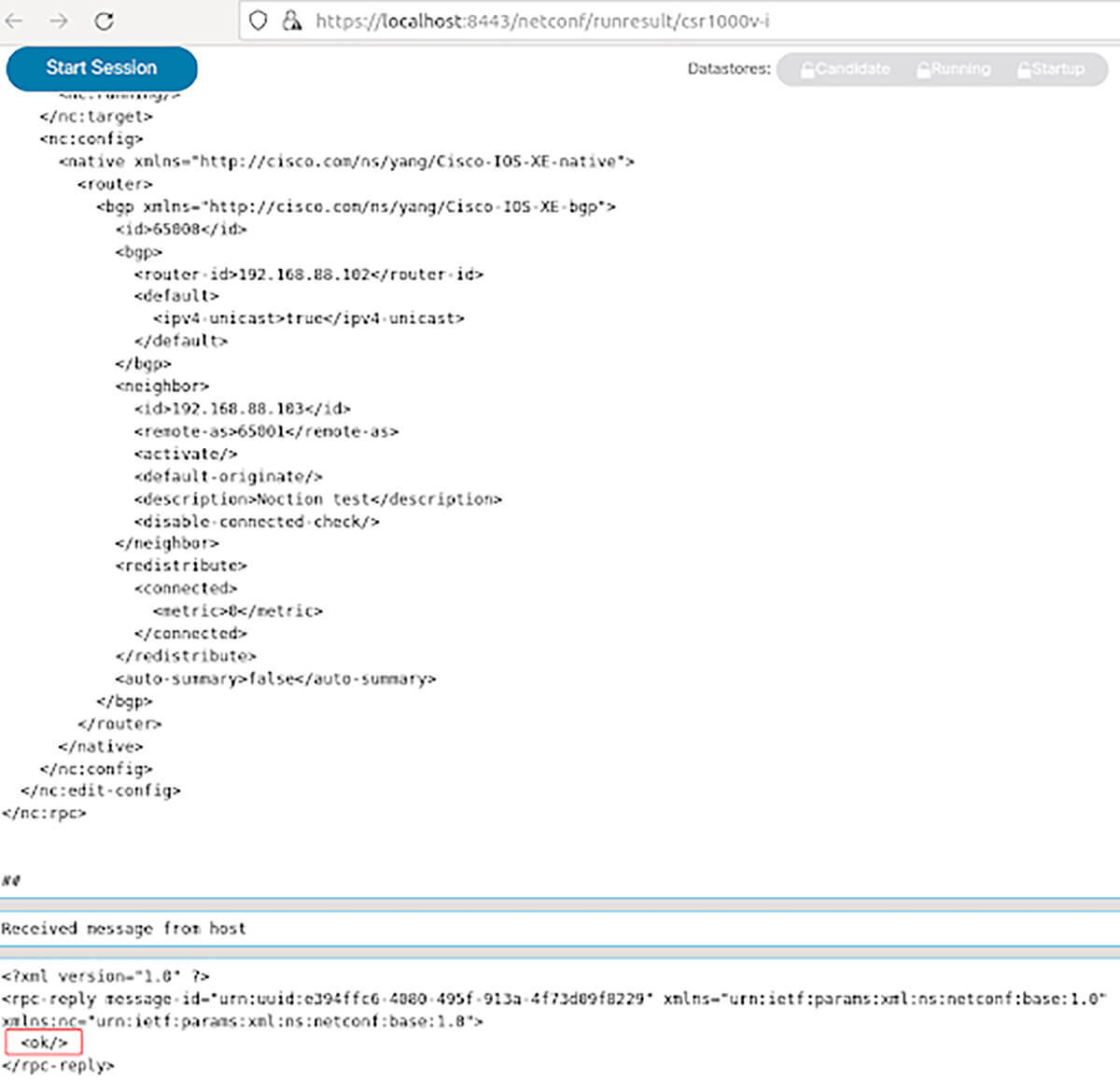 In order to confirm that the change took place, the configuration can be checked using the get-config operation.

After the NETCONF RPC message is received that contains the YANG formatted request to configure BGP, the operation is completed, and the running configuration is modified to reflect this (Figure 11). This also demonstrates how the software process on the CSR1000v converts the received YANG formatted NETCONF RPC message into standard Cisco IOS CLI.

A user can still use regular Cisco IOS CLI to modify the configuration and execute show commands in addition to using NETCONF/YANG to do the same.

YANG data models and NETCONF provide an alternate and centralized way to configure networking equipment instead of using the Command Line Interface (CLI) or Simple Network Management Protocol (SNMP) and collect operational data with the show commands from devices.

As the data models are standards-based, the same procedure can be used to configure or collect data from different vendors’ devices. Therefore, they are ideal for customers with a network infrastructure built from multi-vendor devices.

NETCONF has been developed to overcome SNMP issues. It can backup and store configurations from network devices, and unlike SNMP, NETCONF messages are encrypted using SSH. NETCONG also has the ability to test configurations before commit or provisioning.

In the future, however, we will see if NETCONF will be really used to install, update and delete device configuration and not just get operational data like SNMP when configuration management with SNMP was abandoned.