Noction is pleased to announce the release of IRP 2.1
The new product version includes Exchange's support as well as complete Route Reflectors support. It also features the platform's enhanced Explorer, configuration interface redesign, and a set of new reports.

Internet Exchanges Support
One of the most frequent feature requests we had so far at Noction was support of Internet Exchanges as this is a very cost-efficient alternative to IP transit for our customers. We are proud to announce that version 2.1 of IRP is able to optimize routing across Internet Exchanges and peers offering a partial routing table. 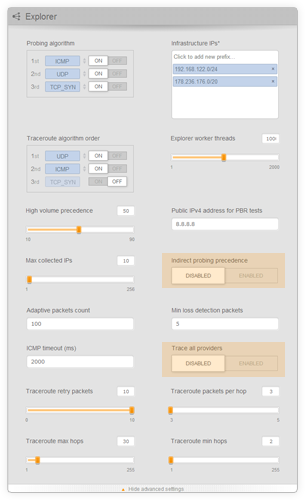 Increased Explorer Performance
Administrators can boost the system's Explorer by configuring it to run a different operation algorithm that uses traceroutes less frequently than its regular operation. By doing so, the performance of the Explorer considerably increases allowing for more efficient probing.

Another addition to the Explorer is the ability to specify the priority of the direct VS indirect prefix probing. By default the Explorer is designed to probe the destination prefix directly in order to collect the necessary performance metrics. However, if the Explorer is not able to get the host address of the destination, it runs an indirect probing algorithm, which tries to probe the address of the closest router to the destination. However, in some specific network topologies there is a need for the system Explorer to run the indirect probing algorithm by default, rather than the direct one. This is to refrain IRP from considering issues in the last mile when taking routing decisions. In IRP 2.1, this option is configurable and administrators can specify the priority of the two probing algorithms.

Support for Route Reflectors
Since route reflectors are frequently used in various network configurations, we have added full support of route reflectors in IRP 2.1. The platform is able to announce routing updates to a route reflector, which then propagates them to the edge routers. 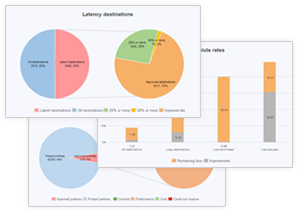 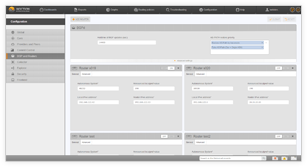 Configurator Redesign
Since ease of configuration is a critical value factor for our product, in version 2.1 we fully revamped the configuration interface. By optimizing the layout and design of the controls and input forms, we escalated user-friendliness and readability to a new level.
We will start scheduling updates with customers starting Monday next week. You can also apply the update on your own by running the following set of commands:

Along with the update this will also reset the BGP session between IRP and your edge routers, so make sure to run it during off-peak hours.

Please contact support@noction.com for an update request or should you need any assistance.